Energy is vital to a country’s growth and industrial development. Access to energy is Goal 7 of the United Nations Sustainable Development Goals (SDGs). Energy encompasses electric power production from coal, hydro, gas, solar, wind, bagasse and biomass sources. It also covers petroleum, natural gas and coal, as raw material or end use commodities. The regular and affordable supply of energy in its diverse forms is vital to industry, commerce, transport and communication. Energy use is a very strong indicator of the level of economic growth and well being. In recent years energy production has received a global mandate to get cleaner and efficient in its production and end use, in order to provide a healthier environment for the citizens. Renewable Sources of energy production like solar, wind and biomass have gained currency to attain carbon neutral growth.

Governments are getting out of the production, transmission and distribution of energy. This is presenting on huge and diverse opportunity for private sector investment in the electricity, coal, petroleum, natural gas, energy storage and electric vehicle segments of industry. The ICC is very active in all these segments, and provides a large and active platform to its members.

The year 2020 has been a year of unprecedented disruption under the shadow of the global COVID-19 Pandemic. It was compounded by Super Cyclone Amphan which battered the East Coast and West Bengal damaging infrastructure and property. The West Coast also had a cyclone. The energy sector ensured that daily life has not been disrupted since March and the economy, education, IT, and commerce have survived owing to uninterrupted supplies of electricity and petroleum products. The future of these vital sectors will depend on increased efficiency, viability, enterprise and innovation. The private sector can provide the lead in all these areas. While Energy and its use is in Transition, enterprise will provide the lead and the best solutions.

India has a diverse and a very large power generation capacity. Mid September 2020 the total power generating capacity in India was 373 GW (IGW=1000 MW), comprised of 231 GW Thermal, 45.7 GW Hydro, 6.8 GW Nuclear and 88.8 GW Renewable Energy. India’s current target is to attain 175 GW Renewable Energysoon,and 450 GW Renewable Energy by 2030. This will entail domestic manufacturing for Solar equipment under AtmaNirbhar initiative which will be a very large segment. Transmission is getting a large share for Private Sector, and Power Distribution which is under severe stress is being privatised. This business in the Union Territories and large loss making segments in states like Uttar Pradesh could soon getprivatised. The modernisation of distribution of power through Smart Meters, Prepaid Meters, adoption of IOT, AI, Machine Learning are getting imperative. Electricity Consumer Rights are to be announced shortly by the government.

Coal mining is finally welcoming direct private sector management and control. India has one of the world’s largest coal reserves and Eastern and Central India is the hub. The production was around 730 MT in 2019-20. The target is to attain 1000 MT very shortly. Recently the government had put 38 coal blocks on auction for commercial mining. The interest for some blocks was very good. The government has declared that Coal to gas, Coal to liquid fuel and Coal to chemicals is the new policy. The Coal Minister has announced a plan for 100 MT coal gasification target by 2030 at an investment of Rs. 4 Lakh crores. Coal will continue to be the mainstay of India’s power generation for a few decades, with a lot of emission control equipment.

India is the world’s third largest consumer of petroleum and gas products. The share of natural gas is planned to go up from 6.25% in the energy basket to 15% at a fast pace. CNG for transportation and piped cooking gas facility are expanding. A pipeline grid has been planned for the entire country with city gas distribution. This will offer huge business opportunities in construction and distribution, besides development of port terminals.

The government has announced raising the number of CNG outlets from over 2,300 to 10,000 in five years. As the automotive sector is moving towards electric vehicles, the need for EV charging stations and the development of storage batteries which will be needed on a larger scale will grow exponentially. Renewable power generation will also need large battery storage. There are reports that the government has plans to offer US$ 4.6 billon as incentives to companies for setting up advanced battery manufacturing facilities. This could be a game changer and a huge business opportunity.

The ICC has been in the forefront of national debates and discussions among stake holders and government entities, besides hosting annual meets and awards competitions for more efficient, environmentally cleaner and consumer centric energy operations.

The India Energy Summit is one of the prime initiatives of ICC in the Energy Sector. The IES that started fifteen years ago has today succeeded in achieving the recognition of being one of India’s Largest Energy Gatherings witnessing active participation of the most important dignitaries & organizations relevant to the sector from India and abroad. Active involvement and participation from the States like Gujarat, Maharashtra, West Bengal, Kerala, Chhattisgarh, Punjab, Madhya Pradesh, Haryana, Himachal Pradeshand others, have also remained a major focus area and key strength.

The Green Energy Summit has proved to be another major initiative of the ICC, which exclusively focuses upon the Indian RE (Renewable Energy) Sector. It succeeded in bringing together leading renewable company and utility leaders, government decision makers and investors to discover how the economic, financial and political framework for renewables is evolving, and to assess the implications of growing renewable deployment for the future shape of the energy industry. The ICC has already completed 10 editions of the Summit which witnessed extensive participation from the Indian RE along with widespread representation from Countries like Austria, Bangladesh, Canada, Belgium, Afghanistan, Ecuador, Iceland, Myanmar, Nepal, Iran, Kwait, Germany, Singapore, Mauritius, South Africa and many others.

The Green Urja and Energy Efficiency Awards is another initiative by the Indian Chamber of Commerce. The Award acknowledges and rewards the Companies in Power Distribution, Power Production including captive power producers, Manufacturers of Solar and Wind Systems or Components and financing institutions of RE projects including Manufacturing and Storage. This award provides a platform to highlight leading examples of innovative and sustainable practices and performance to inspire and motivate others to adopt similar policies and practices and transparently communicate on their performance. Energy Efficiency Service Limited (EESL), an esteemed and Super Energy Service Company, which enables consumers, industries and governments to effectively manage their energy needs through energy efficient technologies, did the evaluation of the award nominations in the recently concluded 2nd edition of the Award.

Continuing with its endeavor towards development & progress of the Energy Sector, ICC has also formed a National Expert Committee on Energy with a view to contribute effectively towards growth of Indian Energy. This Committee is chaired by Mr. Anil Razdan, Former Secretary, Ministry of Power, Govt. of India. The committee comprises of eminent dignitaries and stalwarts from the Energy Sector as its Core Members which includes eminent Energy Experts &Young Leaders like Mr. Pinaki Bhattacharya, Managing Director & CEO, AMP Energy, Mr TusharDalmia, Managing Director, Anvil Cables, Mr Devendra Goel, Managing Director, Lumino Industries, Mr Hitesh Doshi, Managing Director Waaree Group, Mr Anil Gupta, CMD, KEI Industries, Mr Shaji John, Director Power, NLC India Ltd, Mr Awadesh Kumar, CEO, Quenext International. With the plethora of expertise and knowledge along with active involvement of industry, the Committee has been meeting in frequent intervals wherein it has been addressing relevant concerns of the Sector and has also come up with actionable recommendations. Given the ever growing importance of the Energy Sector in India, the ICC Expert Committee intends to continue to act as a forum involving all stakeholders of the sector for addressing key concerns and thereby facilitating growth and development.

The Department is headed by Ms. Serene Ghosal. 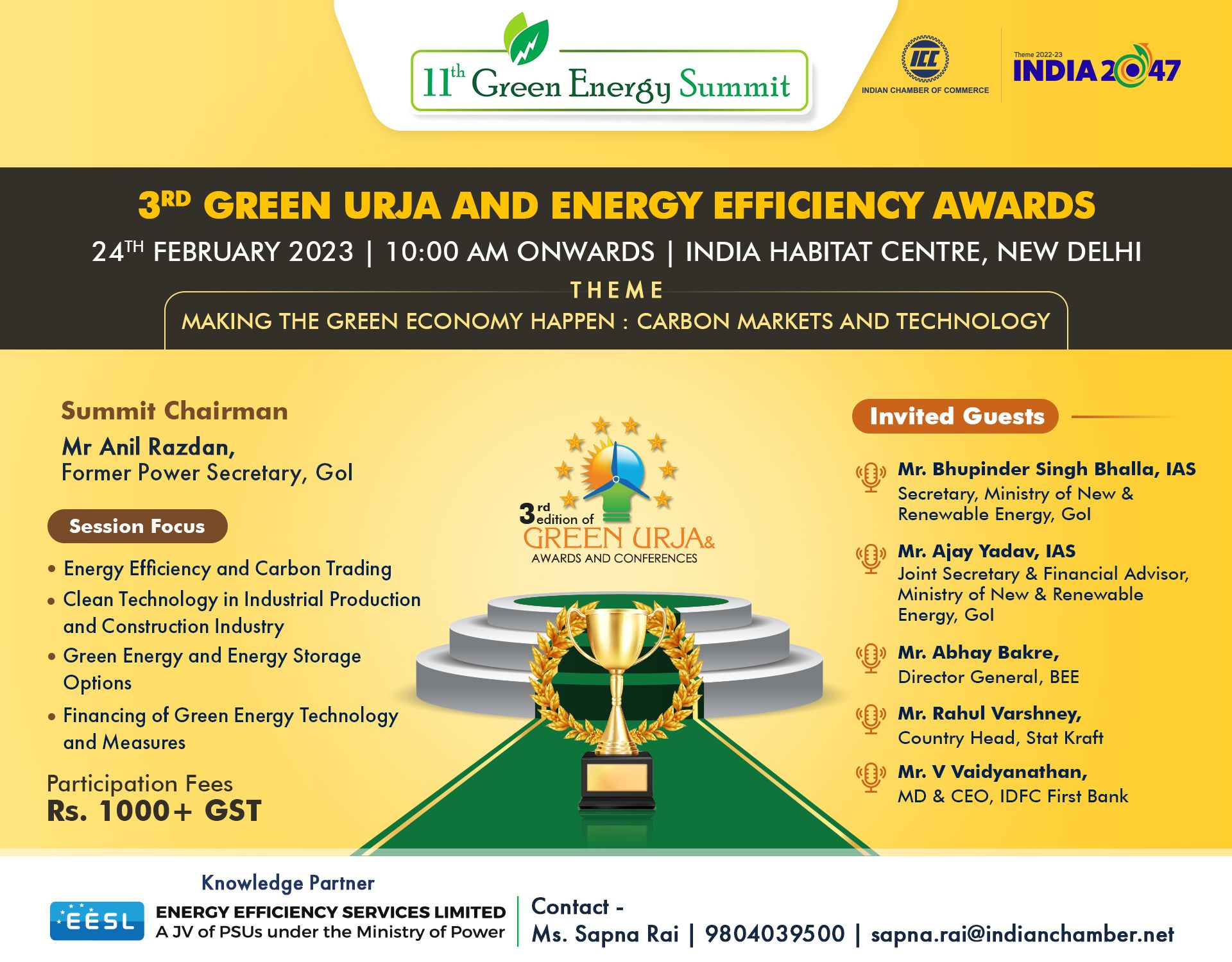 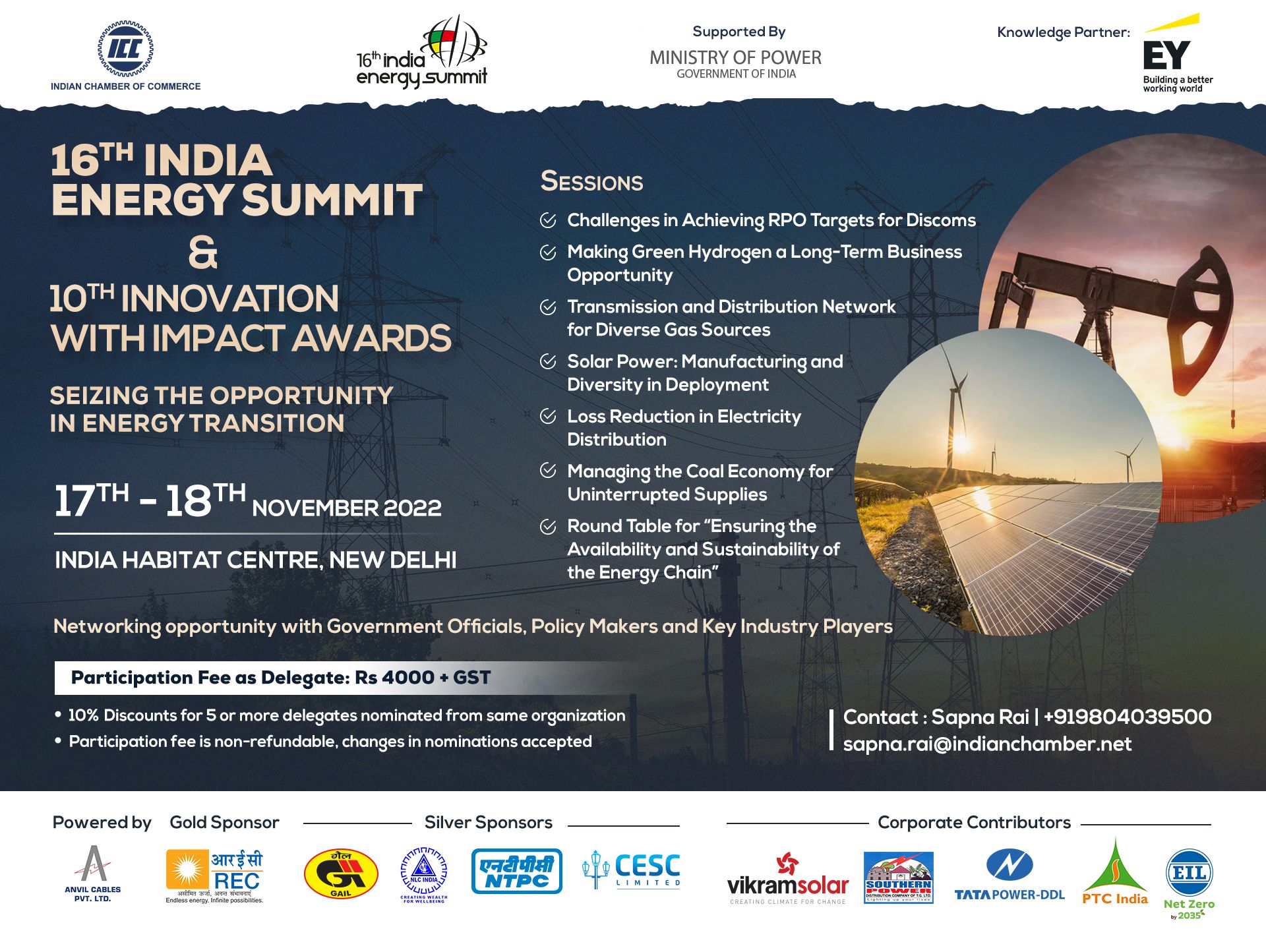 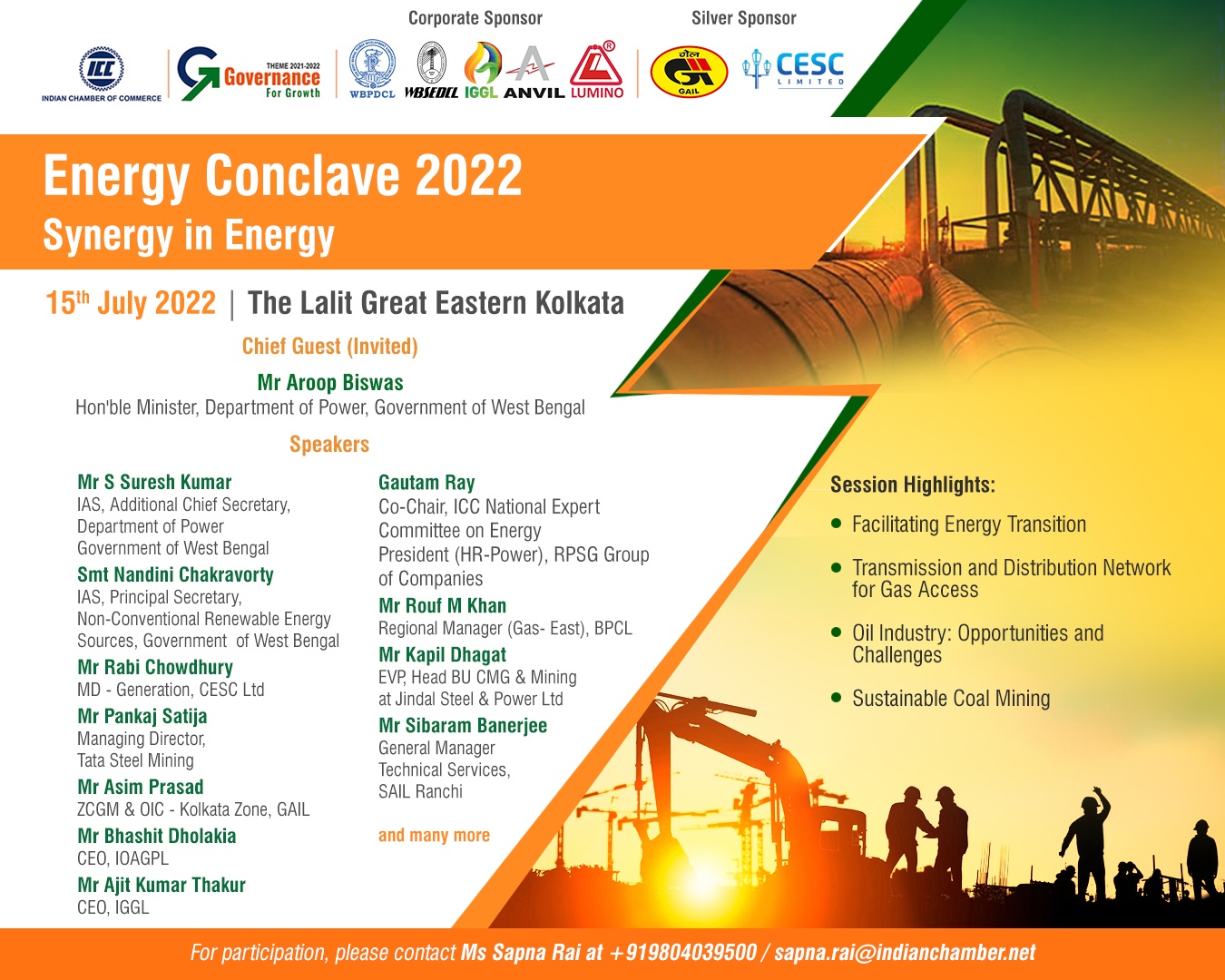 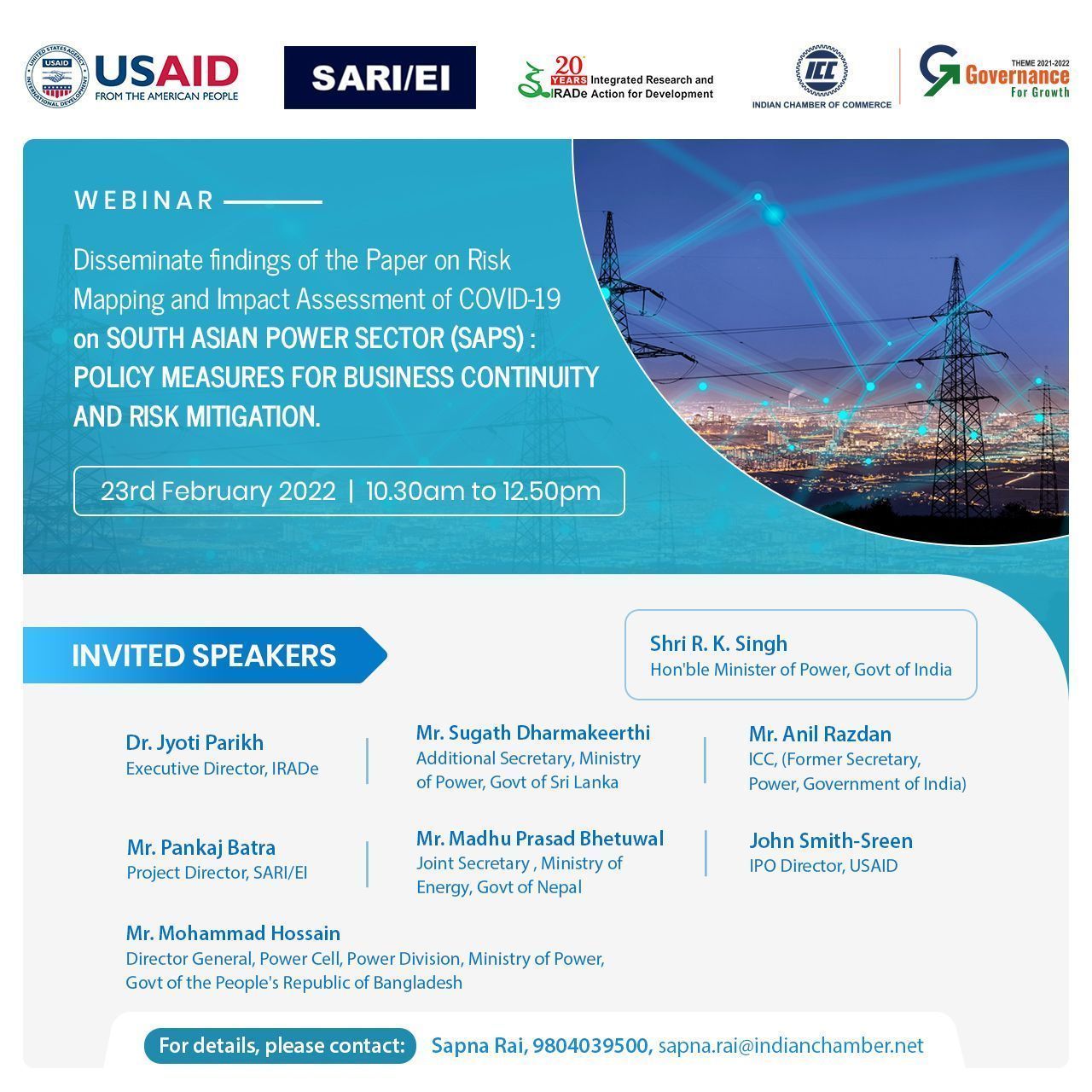 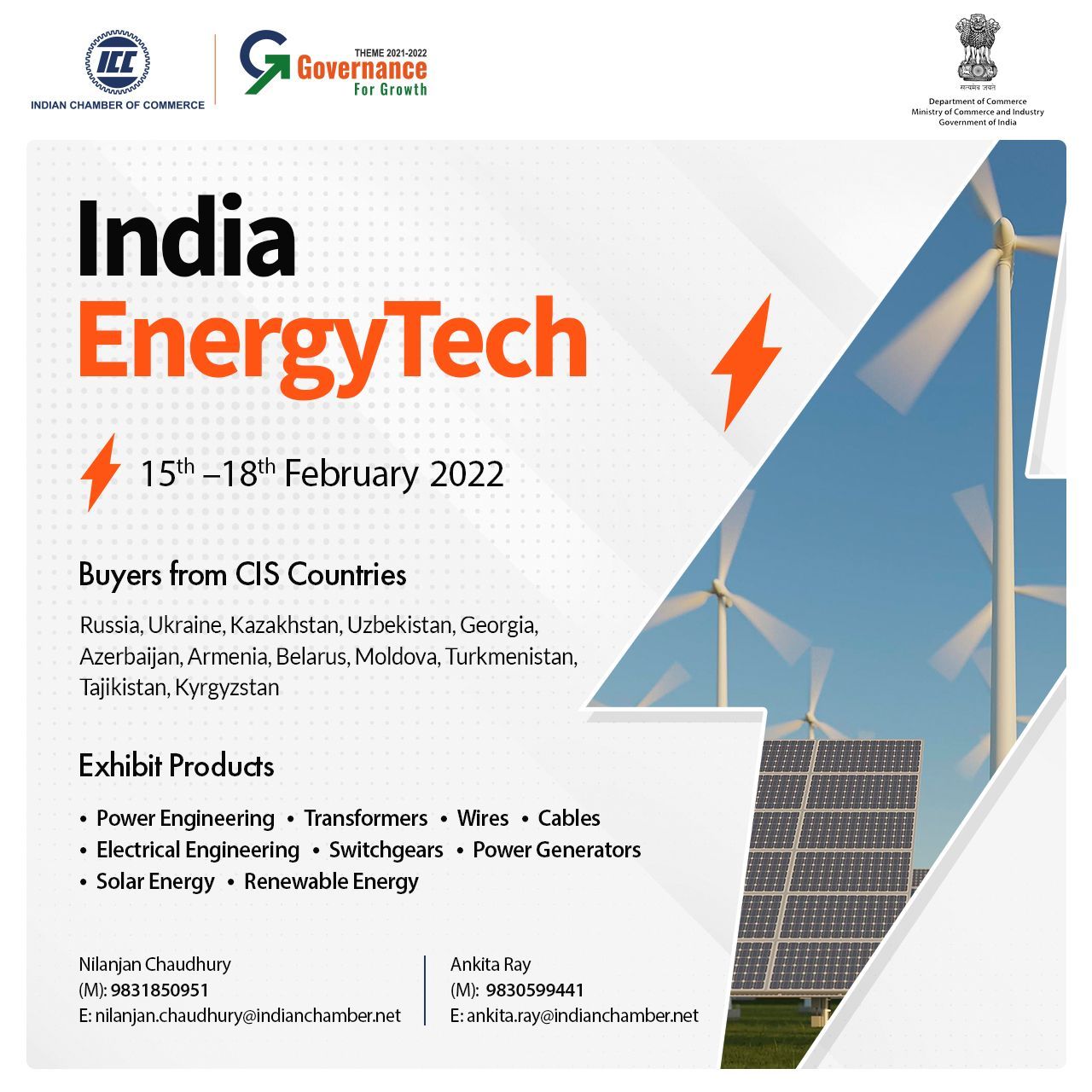 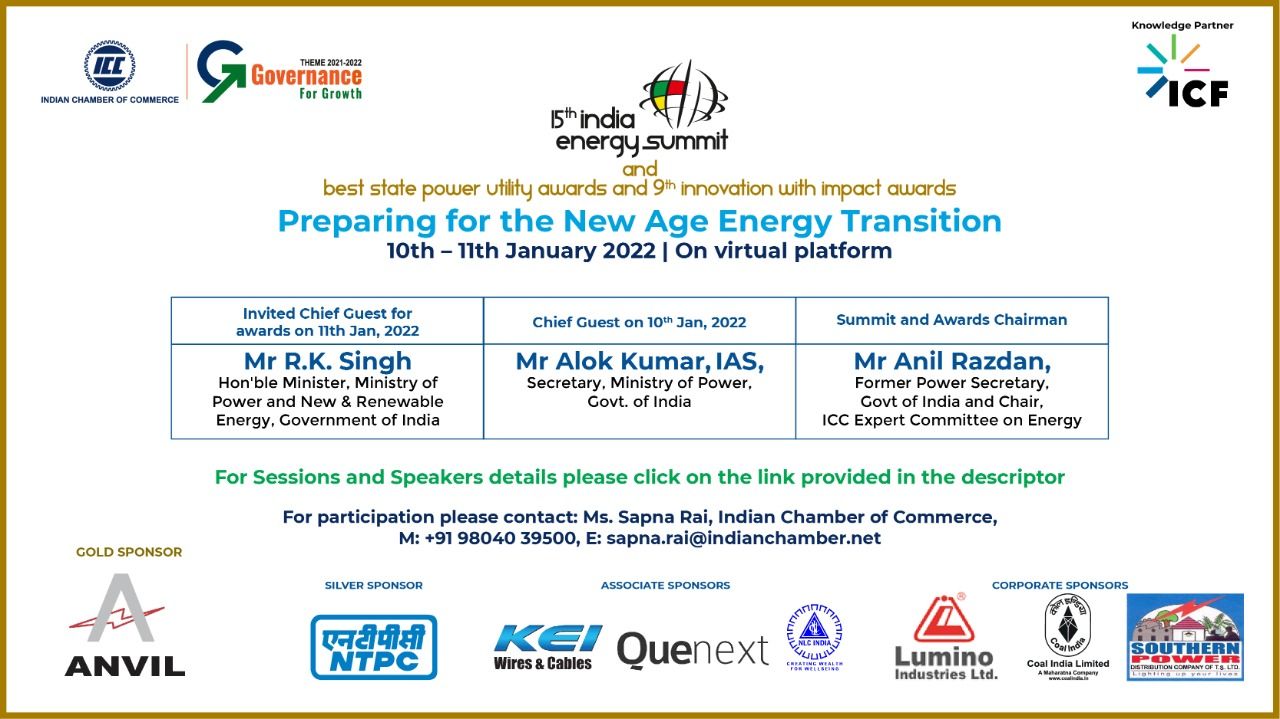 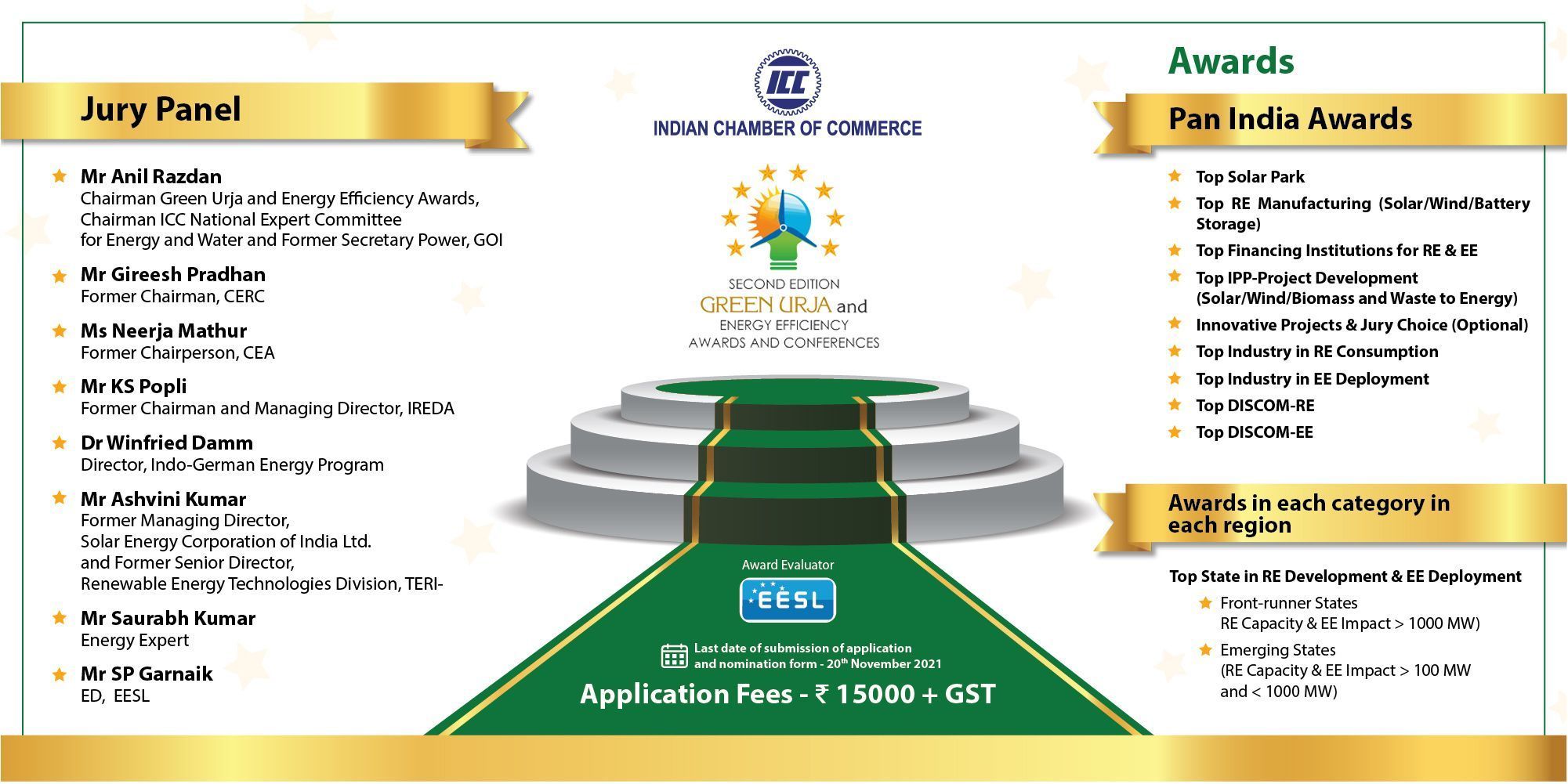 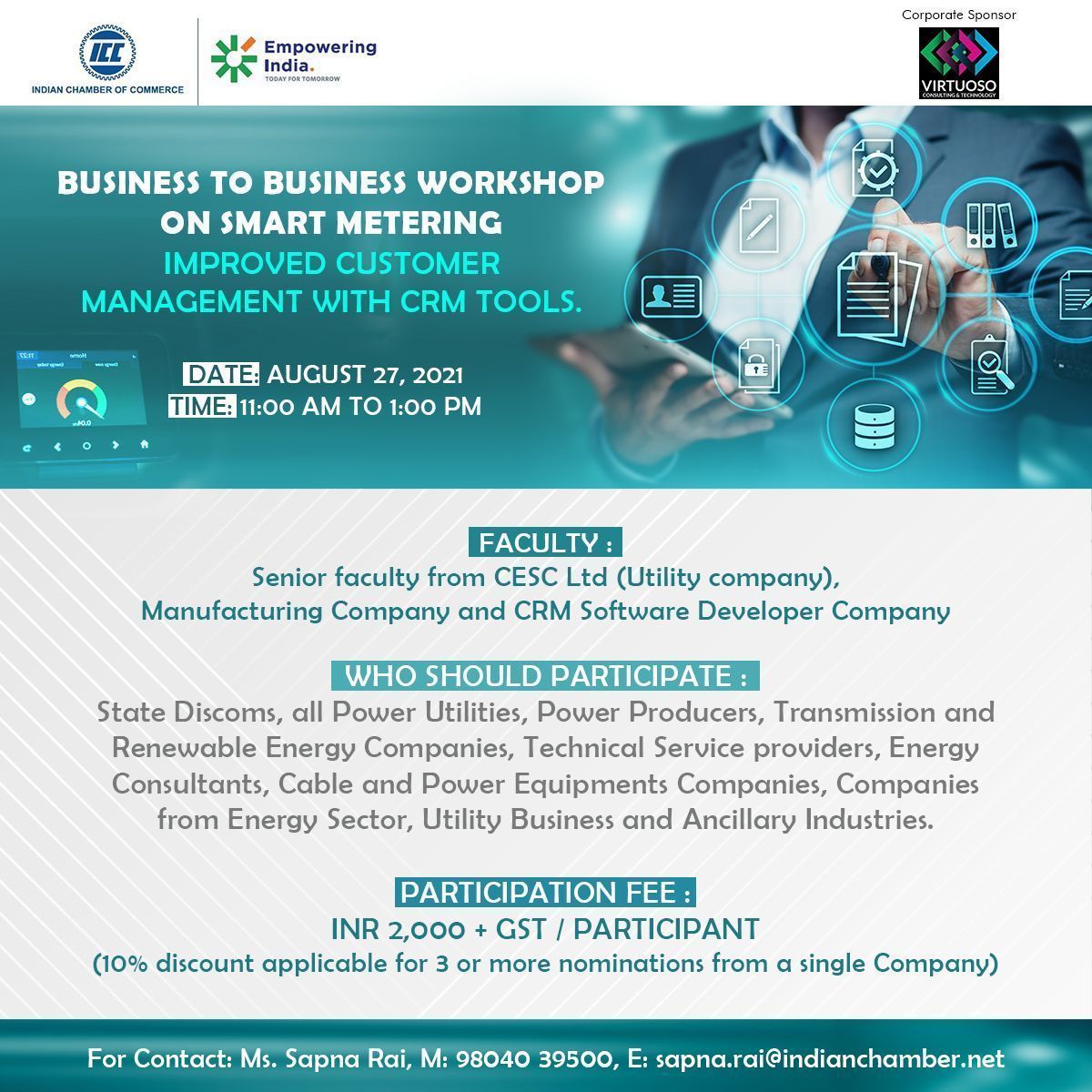 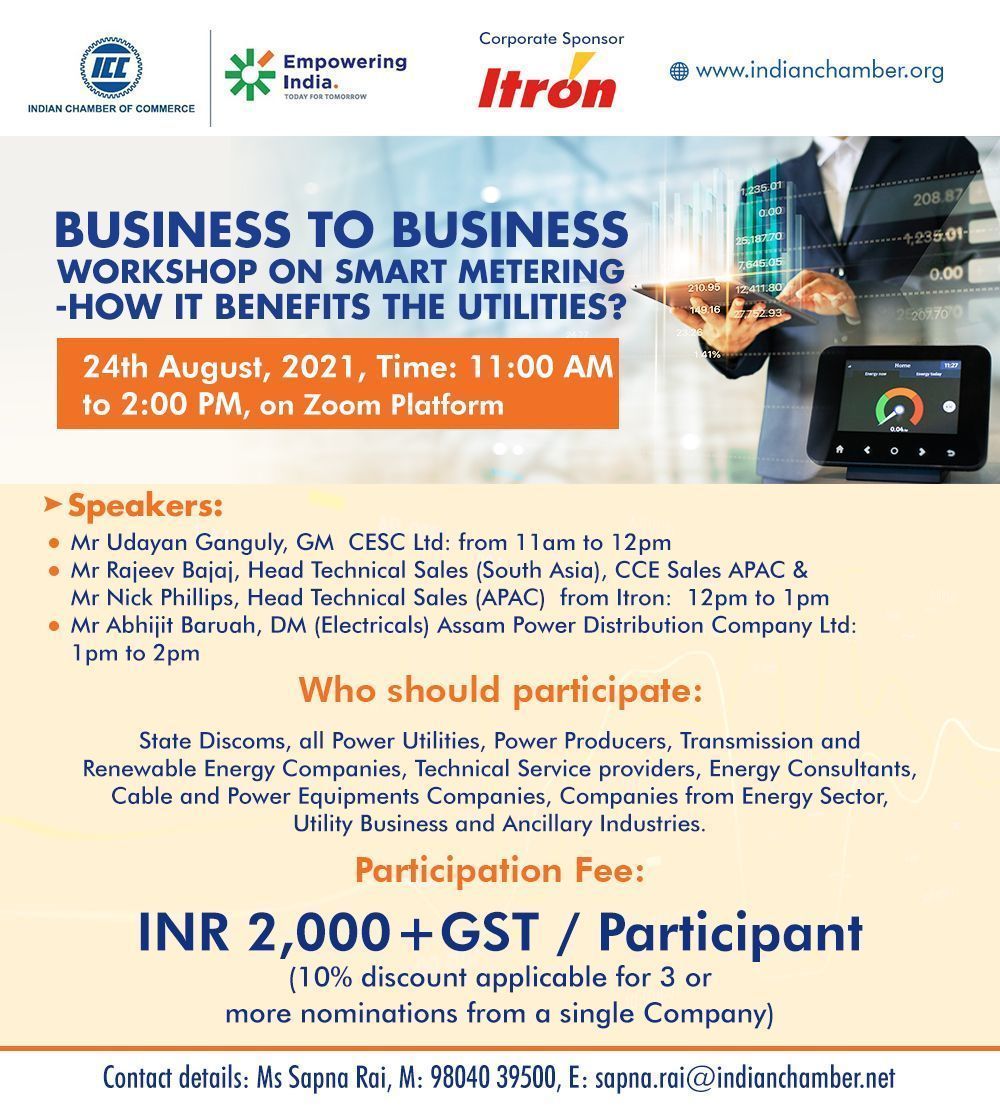 Business To Business Workshop On Smart Metering – How it Benefits The Utilities? 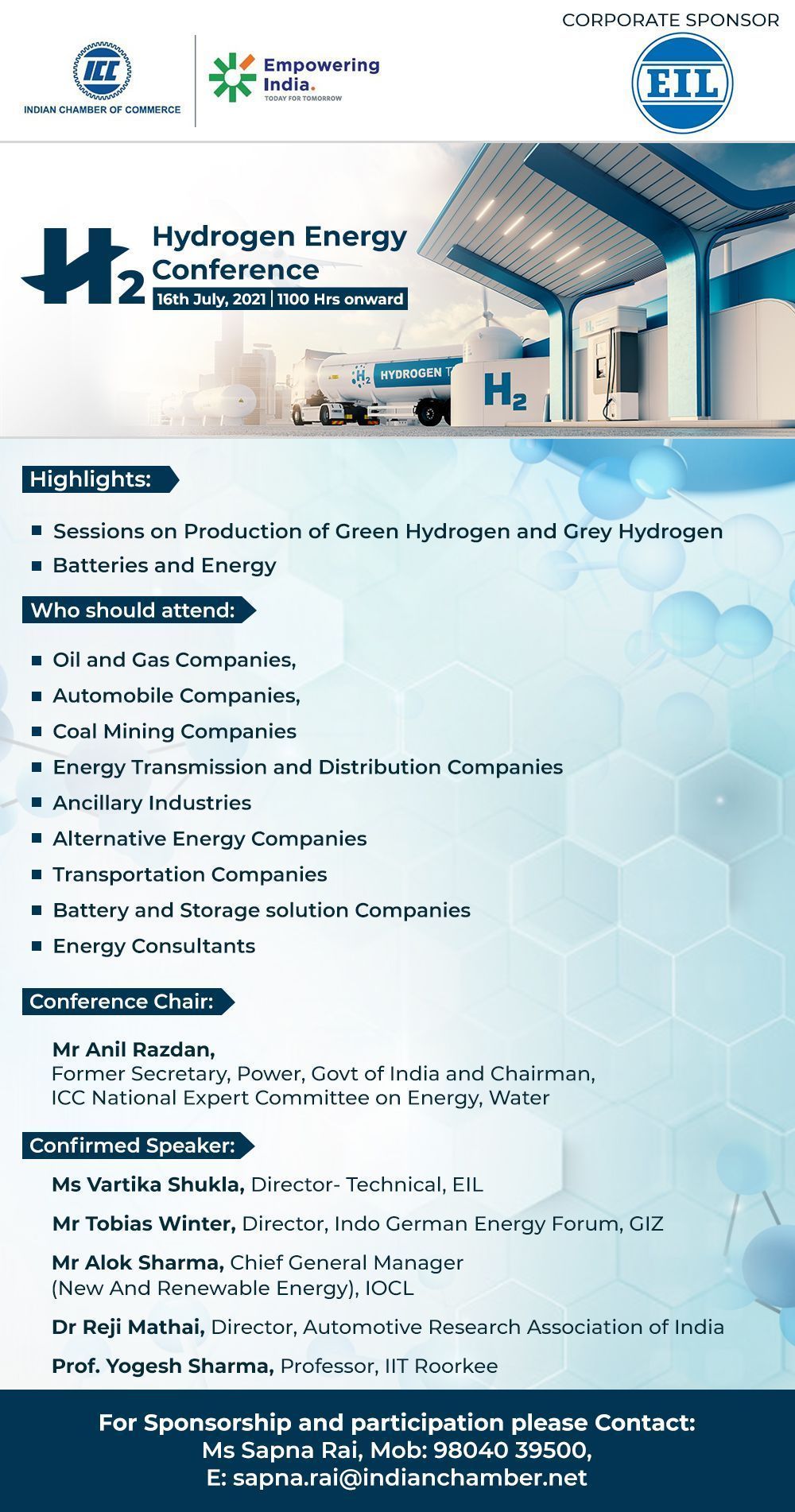 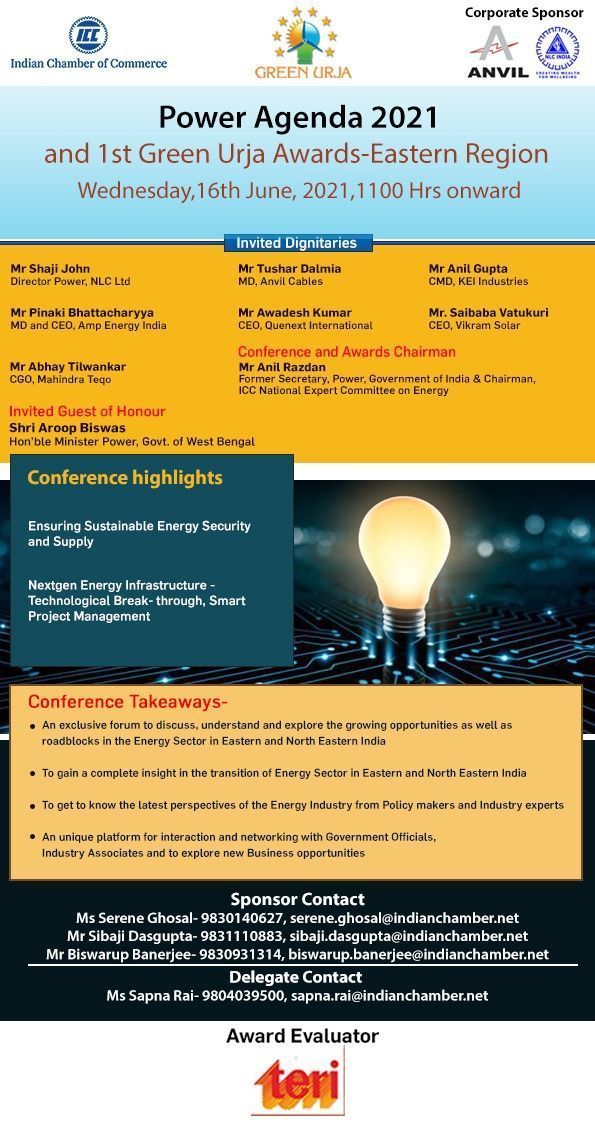 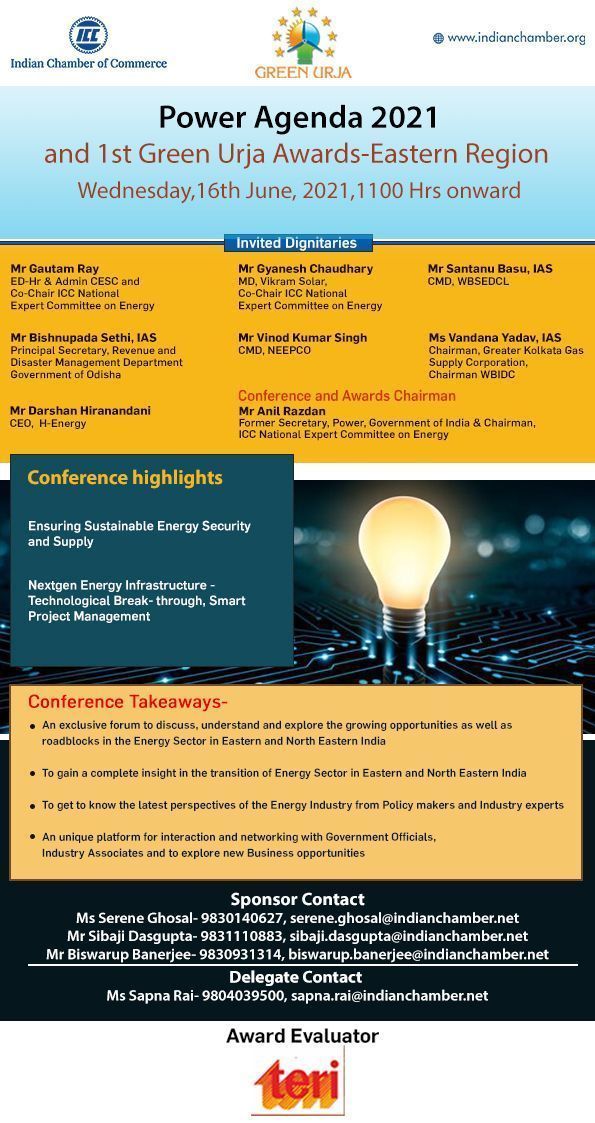 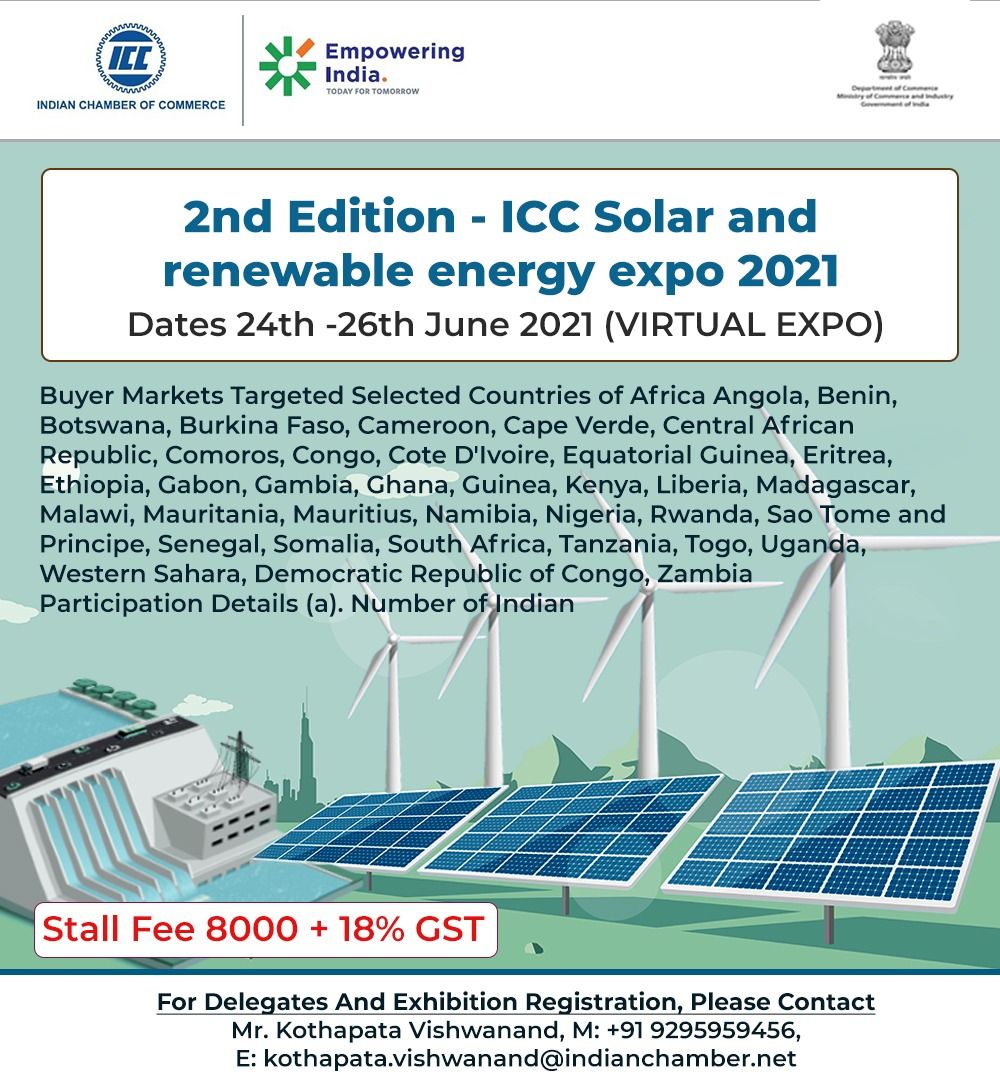 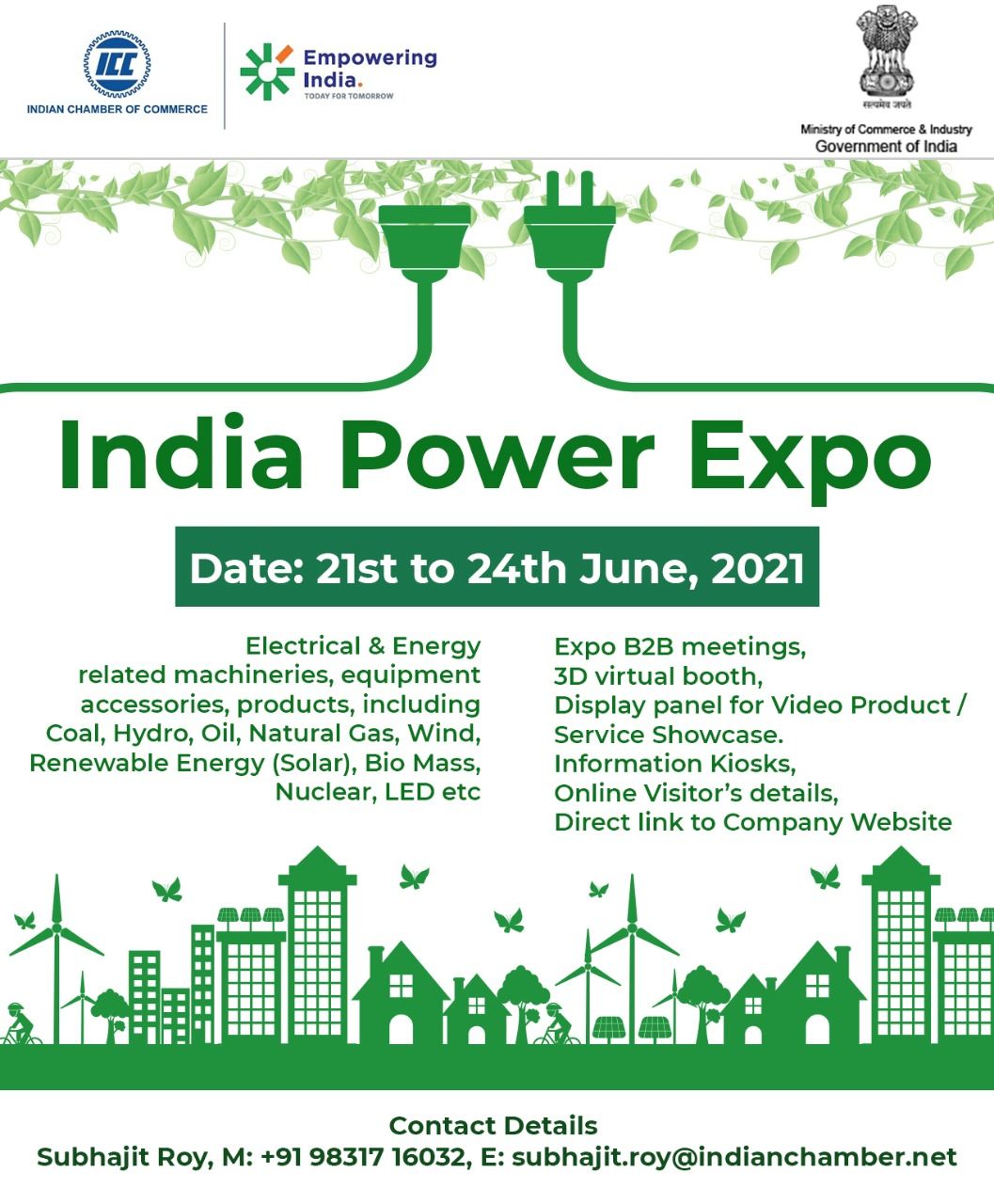 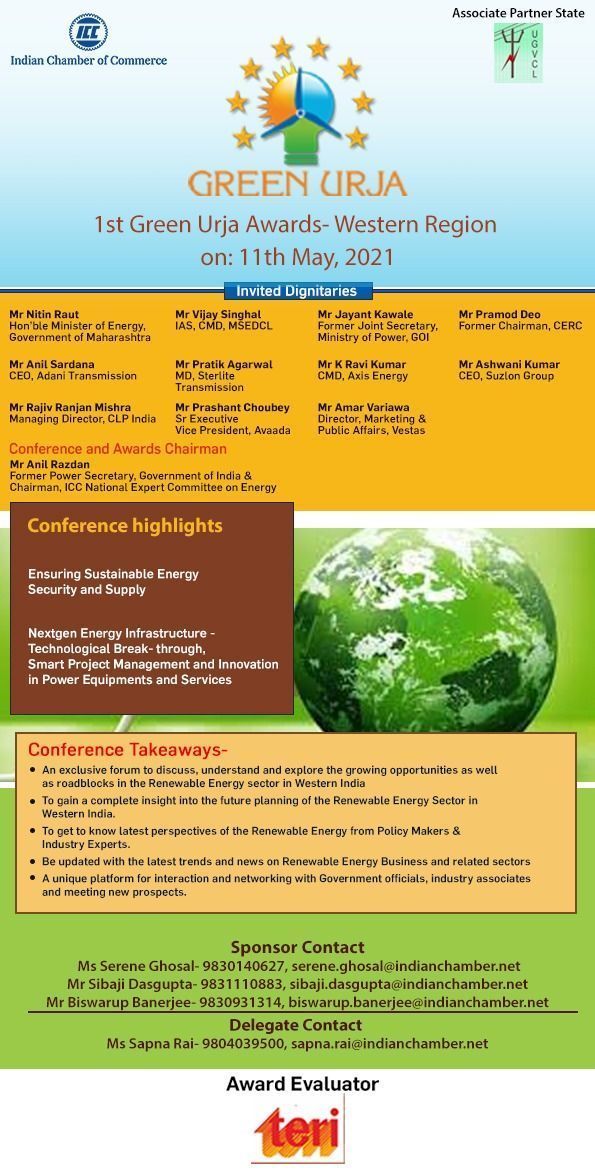 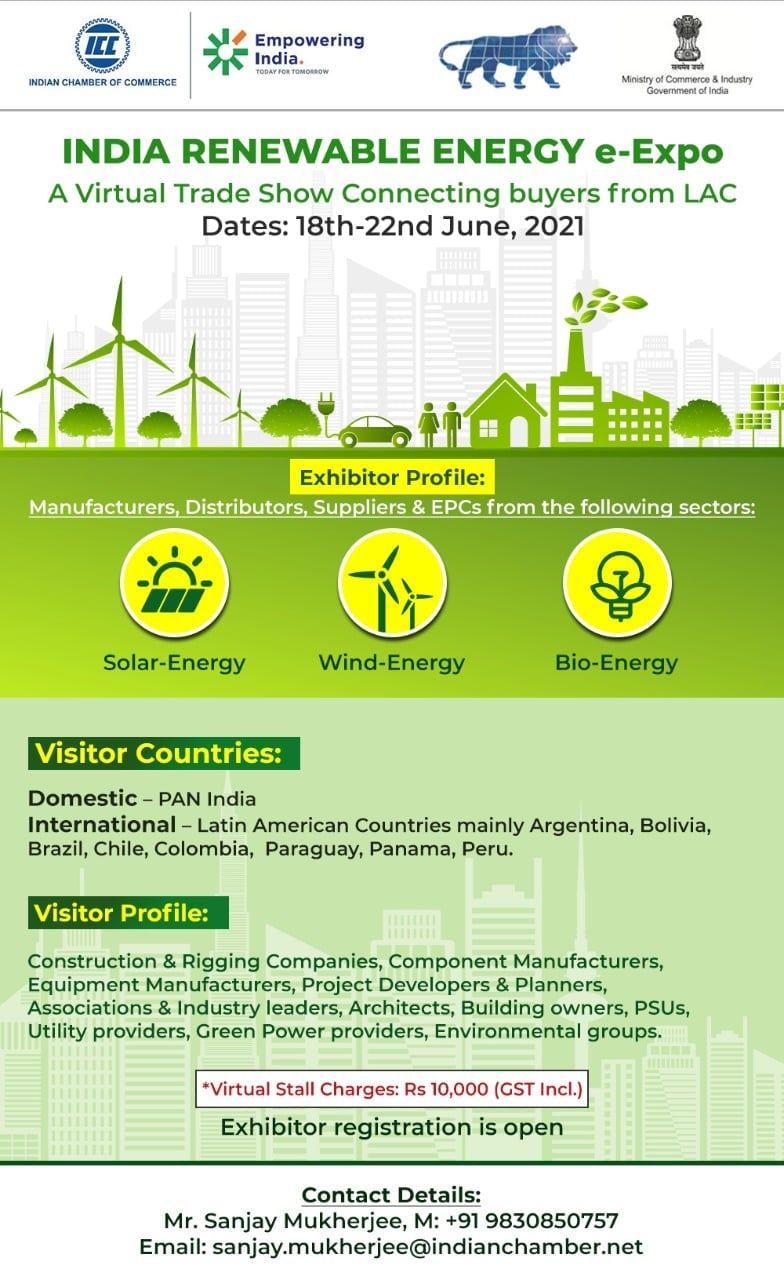 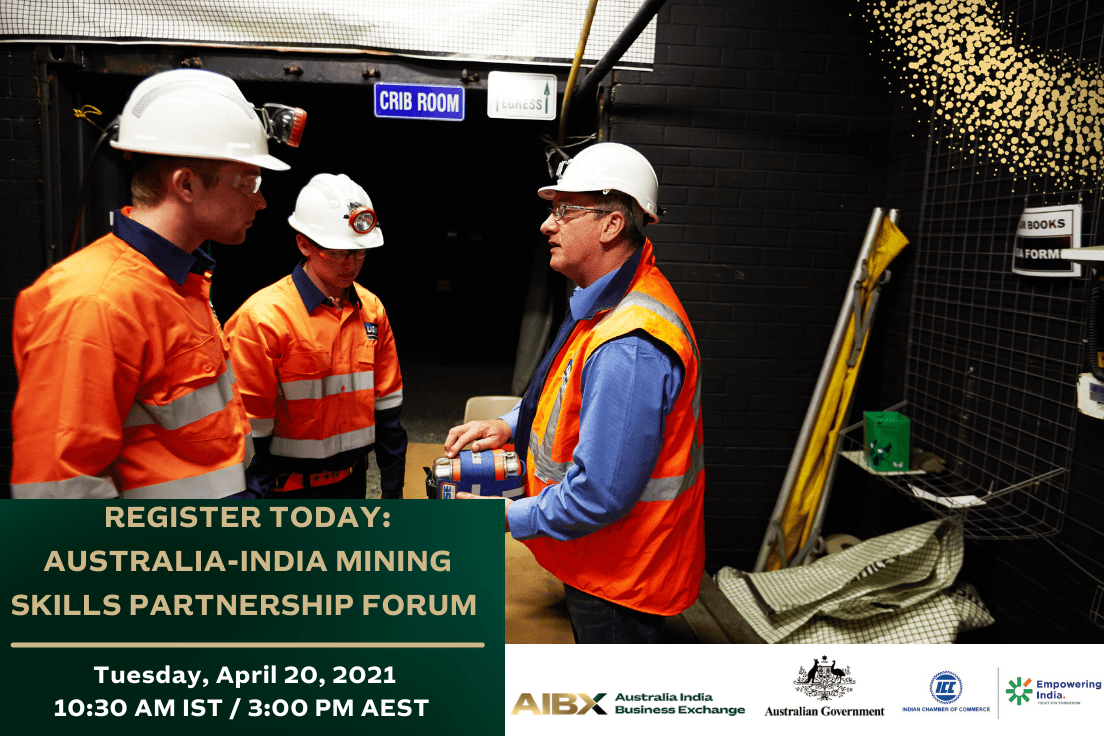 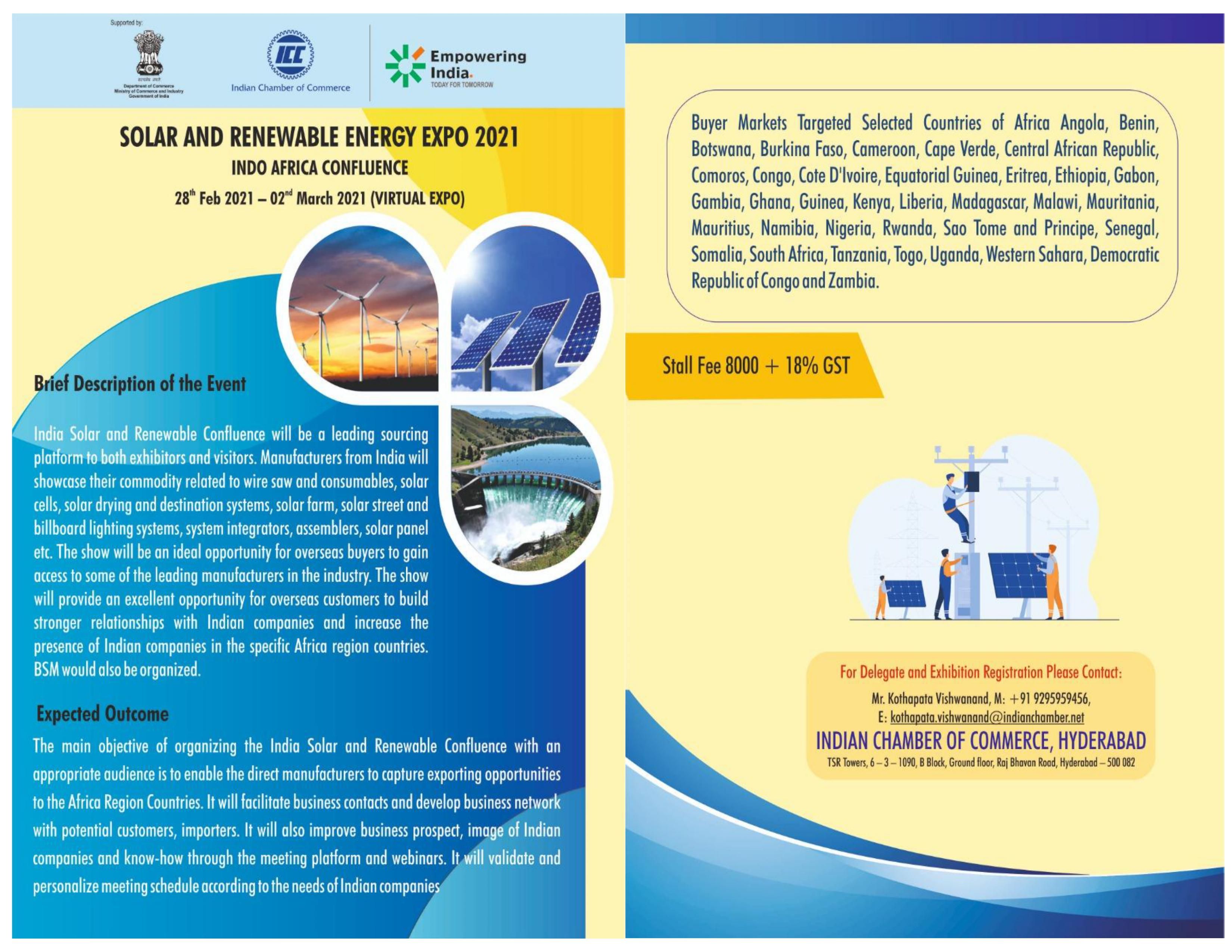 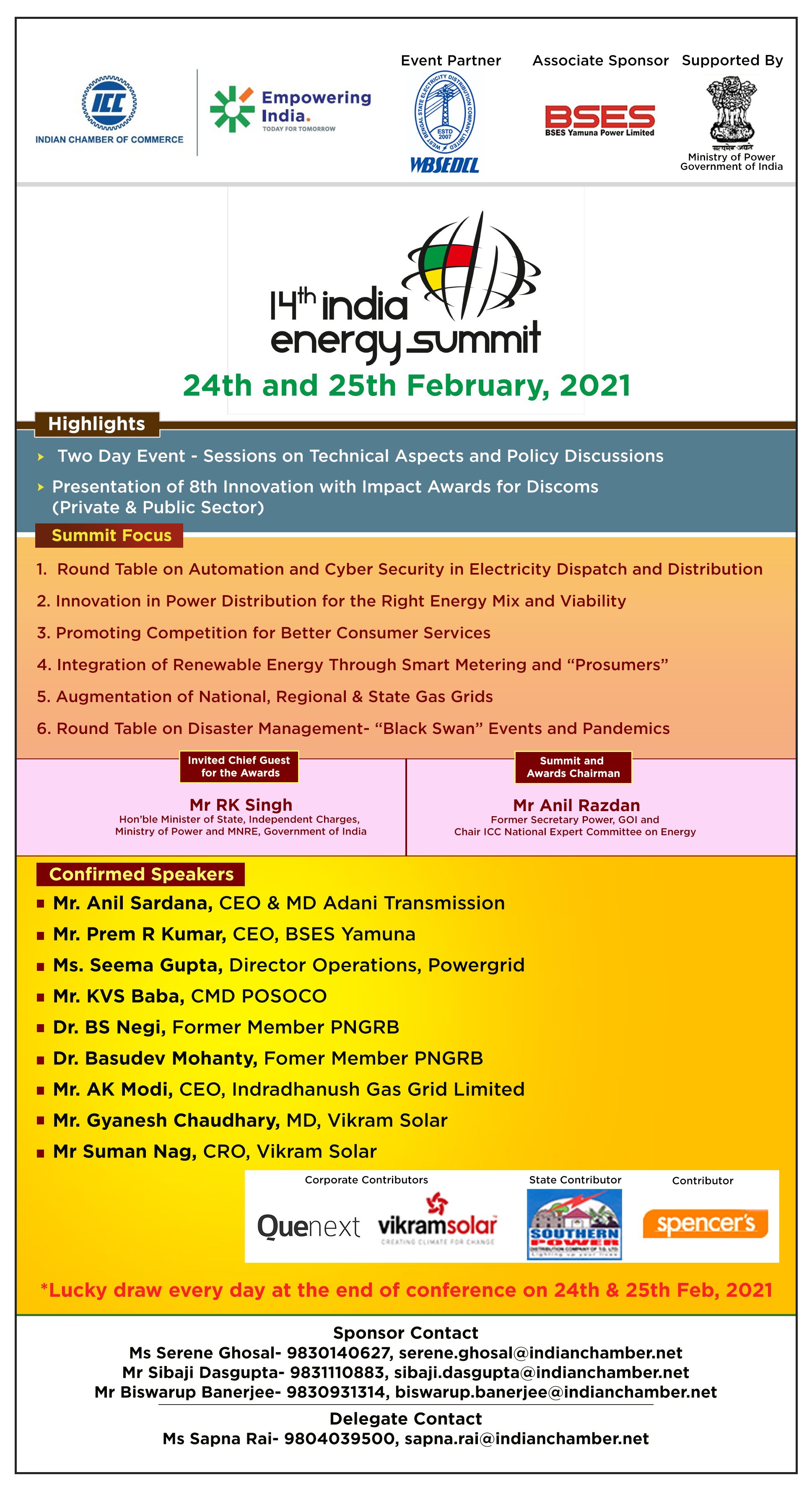 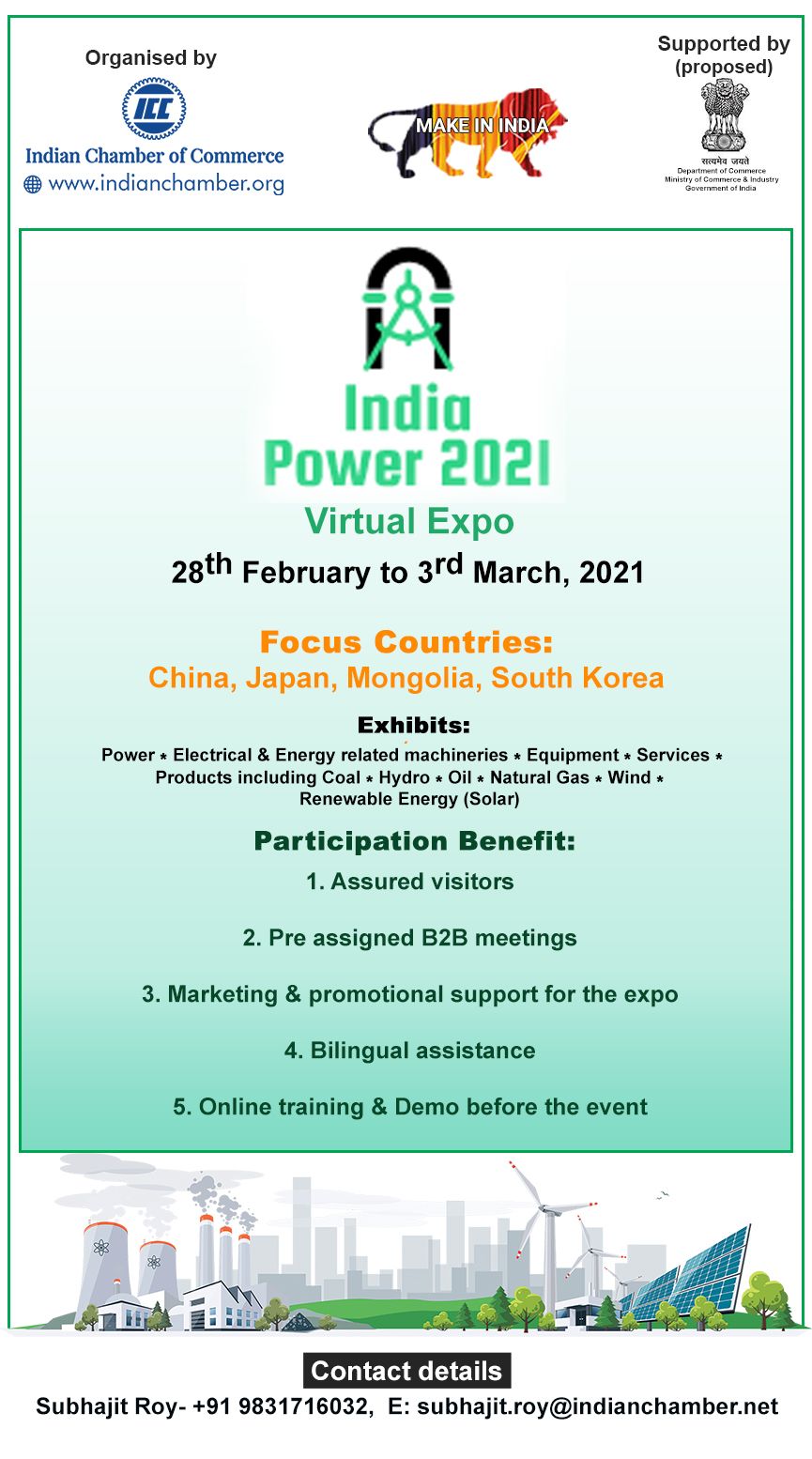 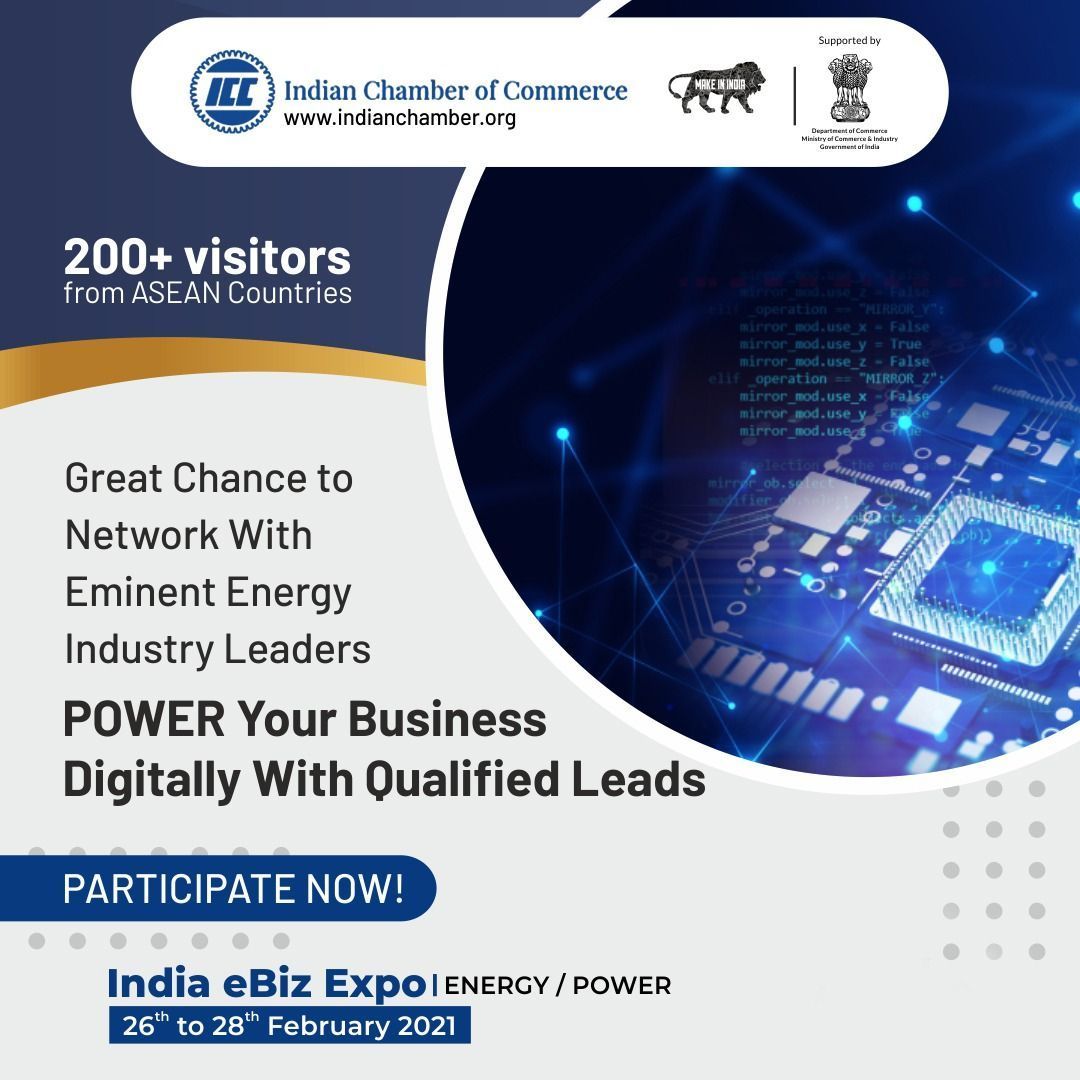 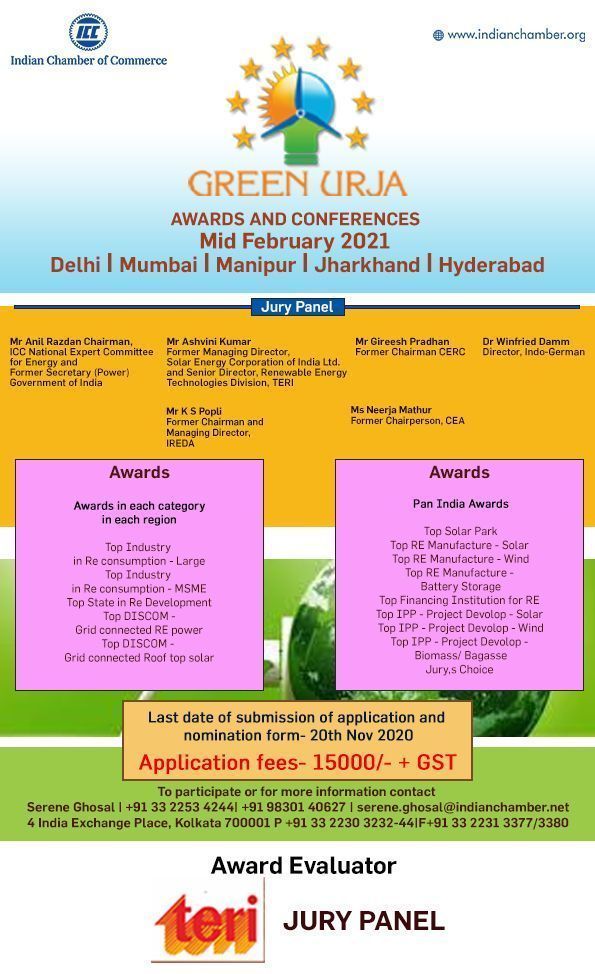