We are living in the most mineral-intensive period in history, and mineral consumption is only expected to rise in the coming years to meet requirement from flagship projects undertaken by Government of India, like “AtmaNirbhar Bharat”.

A well-developed non-ferrous metals industry is equally required since it provides raw materials to several sectors that are critical to the country's economic development. India may expect a paradigm shift in the way non-ferrous metals are produced and used in the future as the use of non-ferrous metals grows in a variety of present and emerging applications, along with new technology.

The Government of India’s "Make in India" strategy, which aims to expand manufacturing's proportion of GDP from 17 percent to 25 percent by the end of 2025, is projected to provide a big boost to the economy. The government has designated 25 sectors, including automotive, power, and defense industries, that have considerable applications of various non-ferrous metals as part of this plan.

The “Metal Recycling Policy”, which the government has formulated in collaboration with industry stakeholders, would address the much-needed reforms on rules or criteria for expanding demand of indigenously produced metal recycling products. The government's responsibility lies on creating policy initiatives and making the process of doing business easier. But at the same time, industry must also invest in high-value items to produce for both domestic and international markets.

Steel industry and its associated mining and metallurgy sectors have seen major investments and developments in the recent past. According to the data released by Department for Promotion of Industry and Internal Trade (DPIIT), the Indian metallurgical industries attracted Foreign Direct Investment (FDI) to the tune of US$ 14.24 billion during the period April 2000-September 2020.

In due cognigence to the opportunities in this sector, government of India has been making consistent efforts to facilitate growth of Steel industry in India. Under the Union Budget 2020-21, the government allocated Rs. 39.25 crore (US$ 5.4 million) to the Ministry of Steel.

Government of India’s focus on infrastructure and restarting road projects is aiding the demand for steel. Also, further likely acceleration in rural economy and infrastructure is expected to lead to growth in demand for steel. The Government of India approved the National Steel Policy (NSP) 2017, as it intend to create a globally competitive steel industry in India. NSP 2017 envisages 300 million tonnes (MT) steel-making capacity and 160 kgs per capita steel consumption by 2030-31. The per capita consumption of steel has increased from 57.6 kgs to 74.1 kgs during the last five years. The government has a fixed objective of increasing rural consumption of steel from the current 19.6 kg/per capita to 38 kg/per capita by 2030-31. As per Indian Steel Association (ISA), steel demand will grow by 7.2% in 2019-20 and 2020-21.

Huge scope for growth is offered by India’s comparatively low per capita steel consumption and the expected rise in consumption due to increased infrastructure construction and the thriving automobile and railways sectors. Steel demand has increased more than expected in all end-user categories over the previous six months, owing largely to substantial stimulus measures implemented or proposed by the US, EU, UK, Japan, China, and now India.

ICC has a dedicated team working towards various initiatives in the Minerals & Metals sector. The Department is headed by Mr. Nilanjan Chaudhury.

All the above initiatives provide an appropriate platform to the stakeholders and acts as a catalyst between the Government and Industry to create a conducive business environment. The committee actively works on important policy recommendation for the sector adding value and growth for the sectoral development. 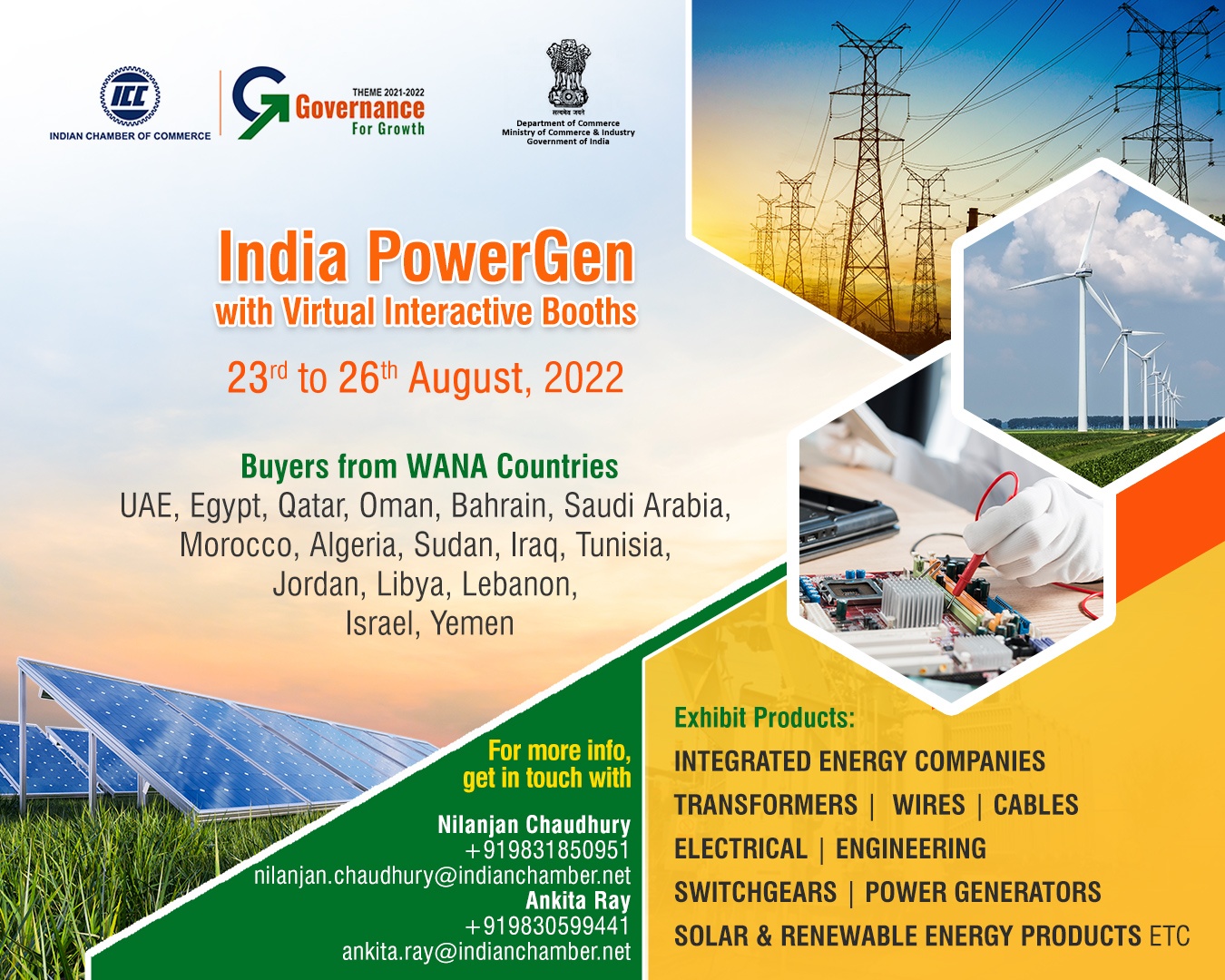 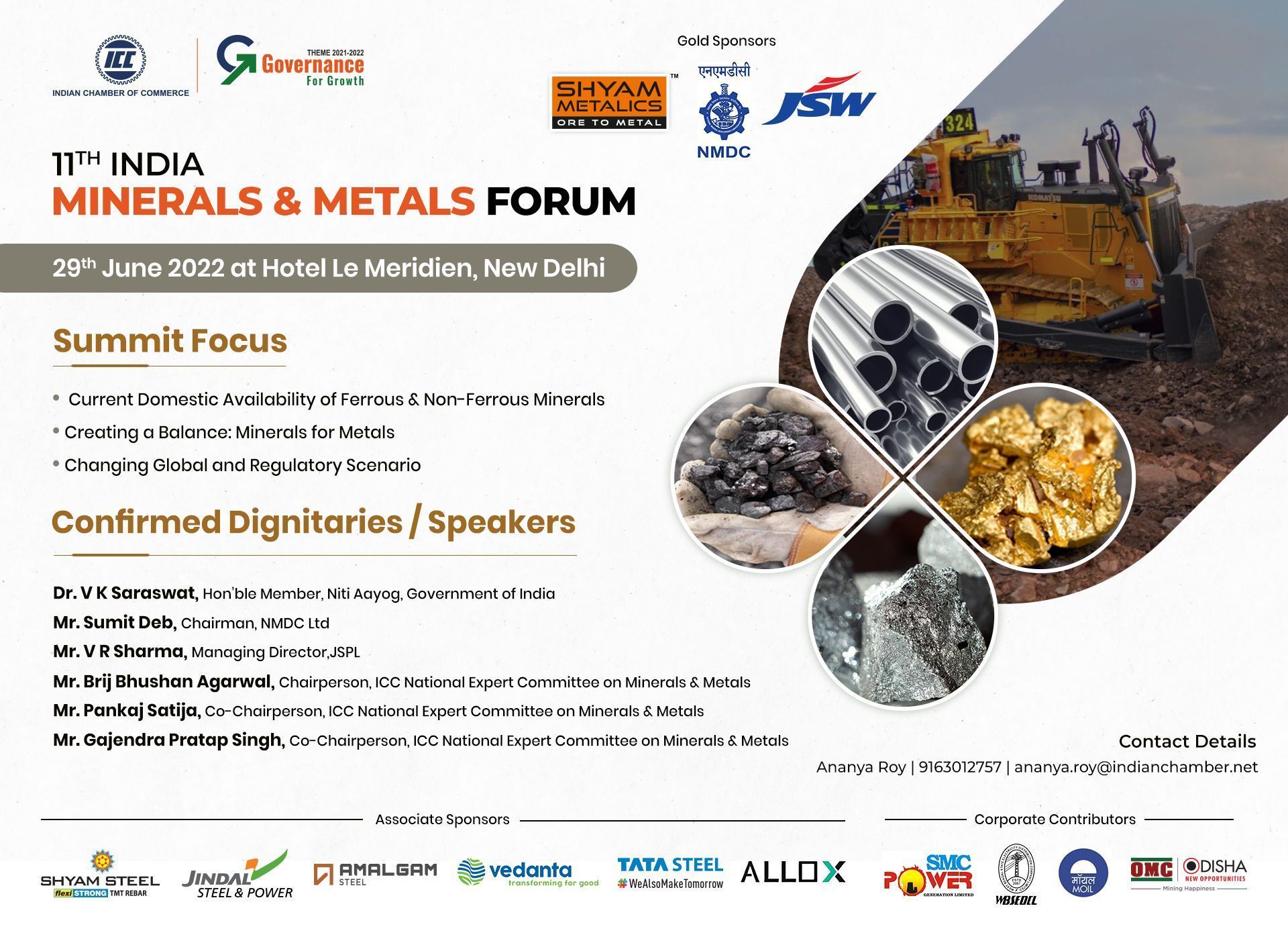 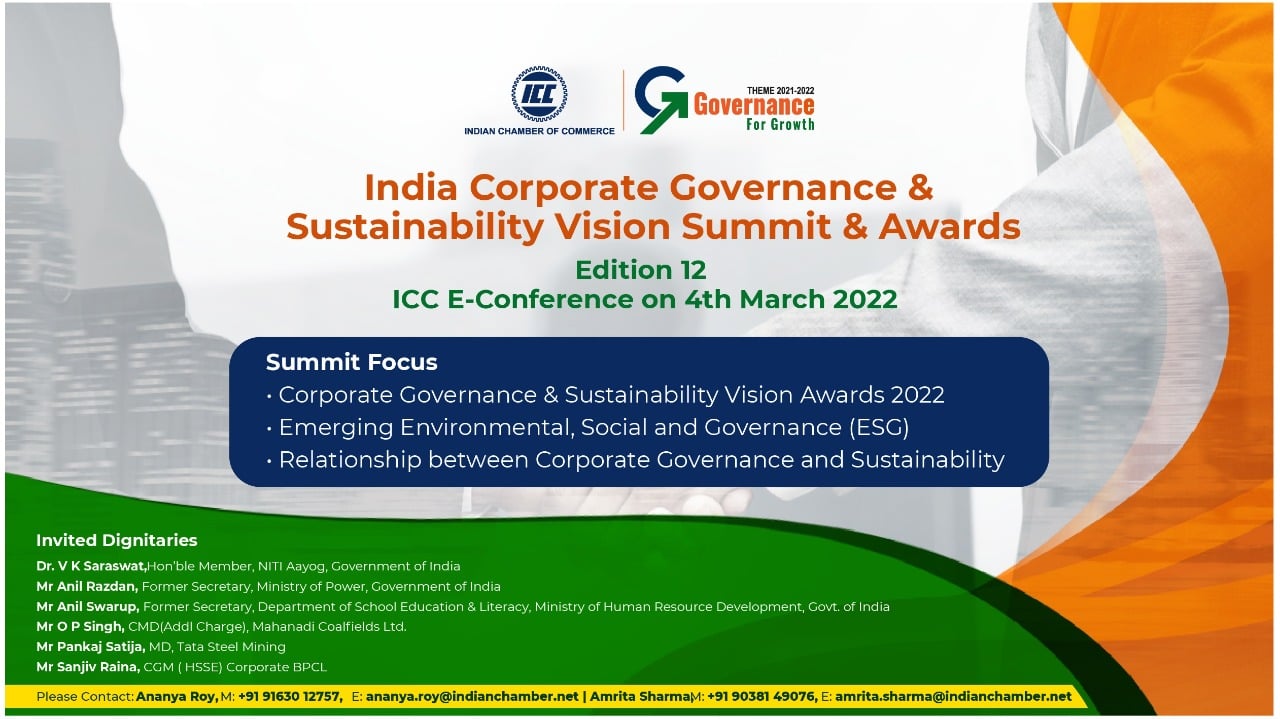 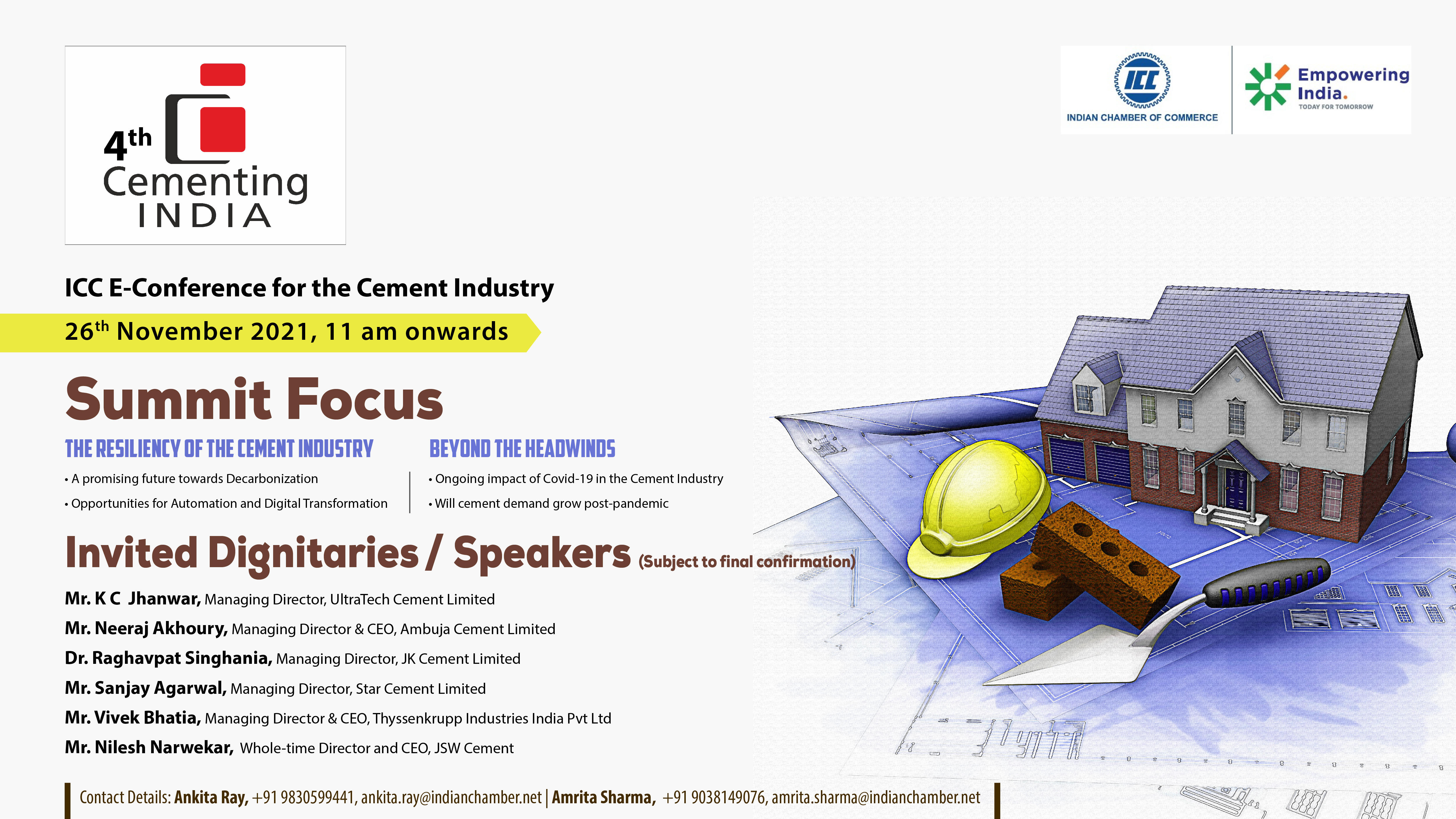 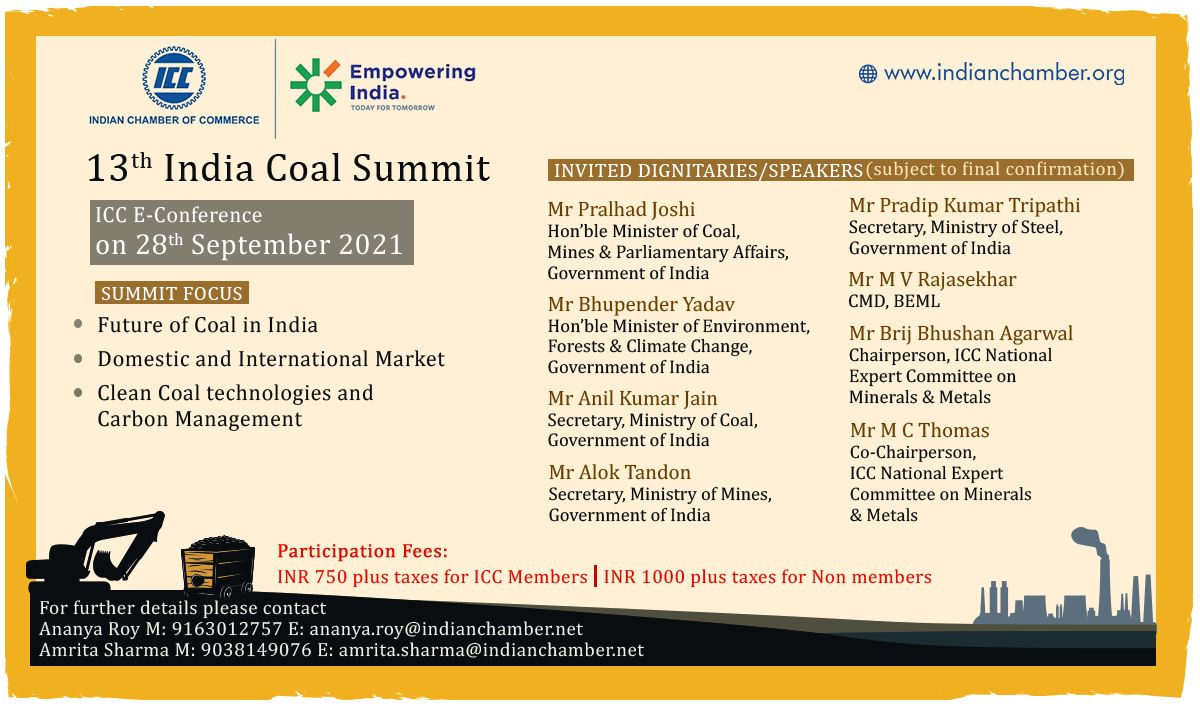 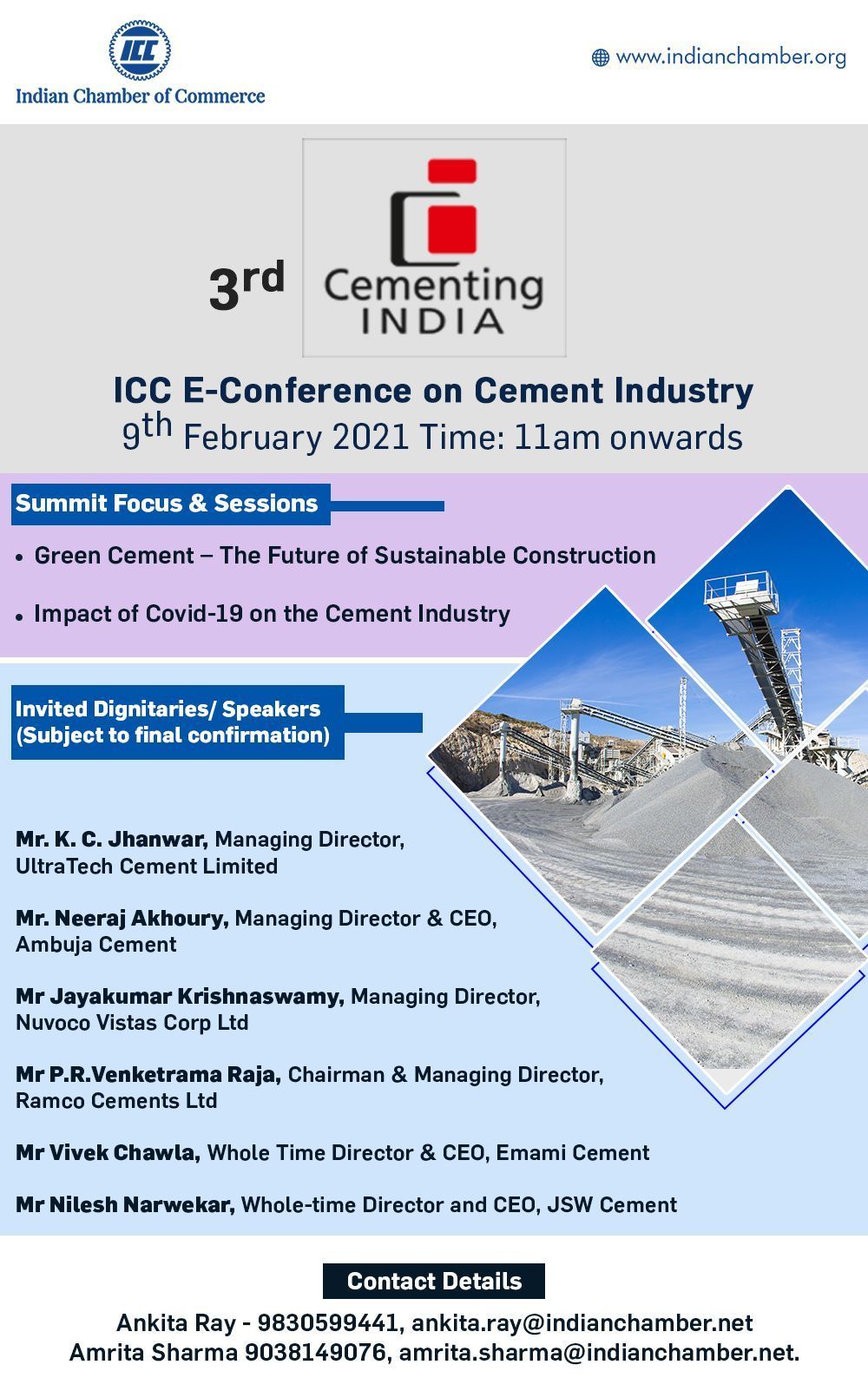