Bihar, is a state of Eastern India.  It is the third-largest state by population and twelfth-largest by territory, with an area of 94,163 km2 (36,357 sq mi). It is bounded by Nepal to the north and by the Indian states of West Bengal to the northeast and Uttar Pradesh to the west. The Bihar plain is split by the river Ganges, which flows from west to east. The capital of Bihar is Patna. The Area measures 38,301 square miles (99,200 square km). with a Population of 103,804,637.

LAND AND CLIMATE
Bihar has three parts on the basis of physical and structural conditions: the Southern Plateau, the Shivalik Region, and Bihar’s Gangetic Plain. Furthermore, the vast stretch of fertile Bihar Plain is divided by the Ganges River into two unequal parts – North Bihar and South Bihar. The Ganges flows west–east and, along with its tributaries, regularly floods parts of the Bihar plain. The main northern tributaries are the Gandak and Koshi, which originate in the Nepalese Himalayas, and the Bagmati, which originates in the Kathmandu Valley. Bihar has an average daily high temperature of only 26 °C with a yearly average of 26 °C. The climate is very warm, but has only a very few tropical and humid months. Several months of the year it is warm to hot at temperatures continuously above 25 °C, sometimes up to 29 °C. Due to less rain the best time for traveling is from October to April. The most rainy days occur from May to September.
Bihar has reserved Forest area of 6,845 km2 (2,643 sq mi), which is 7.27% of its geographical area. The sub-Himalayan foothill of Someshwar and the Dun ranges in the Champaran district have belts of moist deciduous forests, mixed with shrubs, grass and reeds. High rainfall (above 1,600 mm [63 in]) promotes forests of Sal (Shorea robusta) in these areas. Other important trees are Sal Cedrela Toona, Khair, and Semal. Deciduous forests also occur in the Saharsa and Purnia districts, with common trees including Shorea robusta (sal), Diospyros melanoxylon (kendu), Boswellia serrata (salai), Terminalia tomentose (asan), Terminalia bellerica (bahera), Terminalia arjuna (arjun), Pterocarpus marsupium (paisar), and Madhuca indica (mahua).
Valmiki National Park covers about 800 km2 (309 sq mi) of forest and is the 18th Tiger Reserve of India, ranked fourth in terms of density of tiger population. It has a diverse landscape and biodiversity in addition to sheltering the protected carnivores. Vikramshila Gangetic Dolphin Sanctuary in Bhagalpur region is a reserve for the endangered South Asian river dolphin. Other species in Bihar include leopard, bear, hyena, bison, chital and barking deer. Crocodilians including gharials and muggers as well as Gangetic turtles can be found in the river systems.

DEMOGRAPHIC PATTERN
The state is primarily rural, with the vast majority of the population living in compact or clustered villages in the cultivated plains. The harnessing of the Kosi River has stabilized settlement in its valley, while a highly developed system of irrigation supports a large population on the South Bihar Plain. The major cities in Bihar are Patna, Gaya, Bhagalpur, Muzaffarpur, Darbhanga, Munger, and Bihar Sharif.

ECONOMY OF BIHAR
The Gross State Domestic Product (GSDP) of Bihar for 2021-22 (at current prices) is projected to be Rs 7,57,026 crore. This is an annual increase of 11% over the GSDP in 2019-20. As per the revised estimates, in 2020-21, GSDP is estimated to increase by 4.7% over the previous year (budget estimate was 11.1%). By sectors, its composition is 22% agriculture, 5% industry and 73% services. Bihar has the fastest-growing state economy in terms of GSDP.
According to the Economic Survey, Bihar’s Gross State Domestic Product (GSDP) grew by 2.5 percent in 2020-21 and the growth rate is better than the national average, despite the effect of the ‘LOCKDOWN’ imposed to prevent the Covid-19 epidemic.

1) Agriculture
Among the states of India, Bihar is the fourth-largest producer of vegetables and the eighth-largest producer of fruits. About 80% of the state’s population is employed in agriculture, which is above the national average. The main agricultural products are litchi, guava, mango, pineapple, brinjal, lady’s finger, cauliflower, cabbage, rice, wheat, sugarcane, and sunflower. Though good soil and favourable climatic conditions favour agriculture, this can be hampered by floods and soil erosion The southern parts of the state endure annual droughts, which affect crops such as paddy.

2) Industry
The capital city, Patna, is one of the better-off cities in India when measured by per capita income. The Finance Ministry has sought to create investment opportunities for big industrial houses like Reliance Industries. Further developments have taken place in the growth of small industries, improvements in IT infrastructure, a software park in Patna, Darbhanga and Bhagalpur. Most workers in the manufacturing sector are employed in household industries; the rest are employed in steel and other metal-based and food-processing industries.

3) Resources and power
Bihar’s mineral wealth was virtually depleted when the mineral-rich Chota Nagpur plateau became part of Jharkhand. Still, there are a few pockets in the state where minerals are found. Bauxite is found in Munger. The Rohtas district has dolomite, glass sand, cement mortar, and other minerals. Mica deposits are found in Gaya, Nawada, and Munger. Gaya and Munger also produce salt, as does Muzaffarpur.
Bihar’s energy is provided by a small number of thermal and hydroelectric power stations, but these do not meet the needs of the entire state. Several power stations were lost with the partitioning of Jharkhand. In the early 21st century less than half of the state’s villages had regular electricity.

The waterways, once important, are now of little significance. Although all-weather roads reach just over one-third of Bihar’s villages, several national highways pass through the state, including the venerable Grand Trunk Road, which is one of India’s oldest roadways. Road service is best around Patna. The rail line between Kolkata and Delhi, which crosses Bihar, which was opened in 1864. Because of the dense population, the railways carry a heavy load of traffic. They generally run parallel to the rivers because of the difficulty of constructing bridges. Consequently, travel between important towns is often long and tedious. Regularly scheduled airlines serve Patna.

1) Health and welfare
Medical facilities, though improving, are still inadequate outside the towns. Villages are served mainly by allopathic (traditional Western) and ancient Indian medical (Ayurvedic) dispensaries. Unanī) and homeopathic systems of medicine are also popular. Large and well-equipped hospitals and medical colleges are located at Patna, Darbhanga, and Bhagalpur.

2) Education
Although the literacy rate has nearly tripled in the second half of the 20th century to nearly half the state’s population, Bihar still ranks low in literacy among Indian states. The rate for men is significantly higher than that for women. The state’s general aim is to educate all children at least up to the age of 14. In the early 21st century most of those eligible were enrolled in the primary schools. However, only a small proportion were able to continue to the secondary level, as economic necessity forced them to work. Vocational and technical schools are sponsored by government departments. Prominent institutions of higher learning in Bihar include Patna University (1917), the oldest and most important, at Patna; Babasaheb Bhimrao Ambedkar Bihar University (formerly Bihar University; 1960), at Muzaffarpur; and Tilka Manjhi Bhagalpur University (formerly Bhagalpur University; 1960), at Bhagalpur. The latter two schools offer graduate programs and have a number of affiliated colleges. 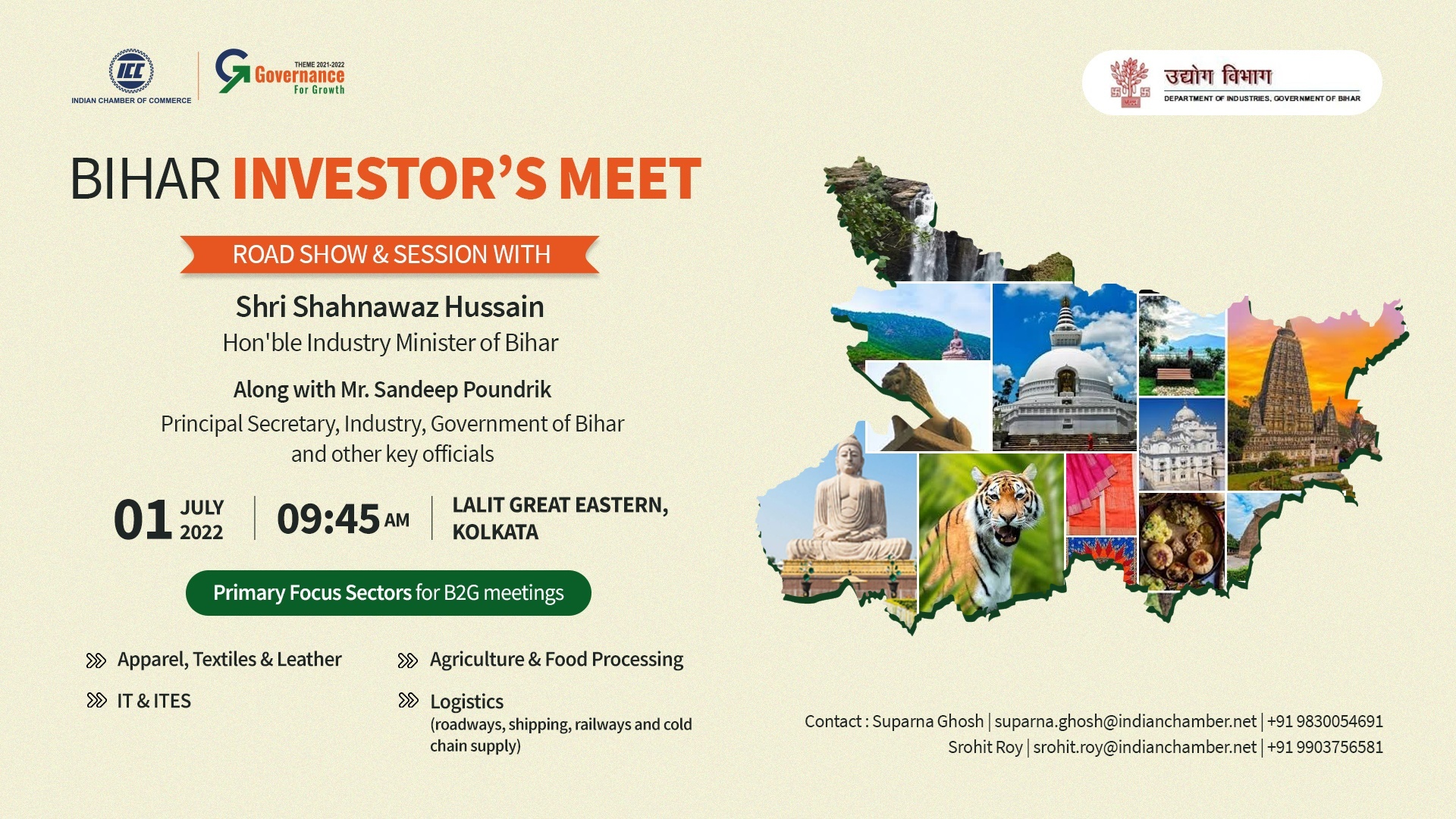 ICC cordially invites you to the Bihar Investor’s Meet, and B2G, and interactive session with Bihar State Industry Department